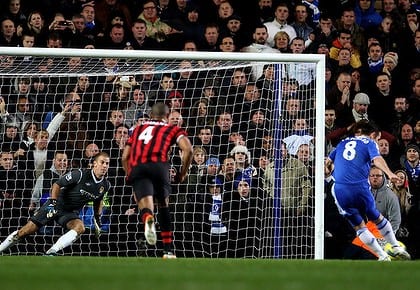 As we all know by now, Chelsea beat Man City 2-1 to really blow the title race back open again but there was some interesting movement within the Winners market worth noting.

Regular readers to the blog might remember this post entitled “Time Right To Take On Man City?” on November 25th where I outlined Man City’s tricky fixture list compared to Man United’s and suggested they could drop a few points which should see their price of 1.77 drift at some point.

Well, this morning you will see Man City have drifted slightly to 1.88 but that doesn’t even begin to tell the full story.

The premier league markets have been impacted by all sorts of things since that above post was made. Everything from dropped points to news of an injury to Nemanja Vidic has had an impact on the price movement but it was always going to come down to last nights match for the real test of Man City’s credentials.

At kick off last night, Man City were 1.70 in the winners market. When they took the lead they dropped to 1.60 and after they were dominating the first 20 minutes their price steamed as low as 1.49!

Talk about an Over Reaction!!!

That was half way through the first half and the markets were reacting as if Man City had already won the match! I think if City had hung on and won the match they wouldn’t have traded much lower then that 1.49 mark. I would estimate that at the very worst they might have hit 1.40 but the upside far out weighs the downside in this situation. So if you were to lay Man City at that point then you would be effectively risking 9 ticks (at worst) to win 40 ticks!

Even the Chelsea equaliser bought a very nice odds swing too. With Man City trading around the 1.49 mark when  Chelsea equalised they shot right up to 1.63 which would have made for a decent trade on its own!

Trading the winners market is also full of opportunities since the market does not go SUSPENDED.

When Chelsea were given the penalty, the match odds markets were suspended and you couldnt do anything. However, the winners market was still open. Man City went from 1.67 up to 1.80 once the penalty was given. You have to bear in mind that the penalty wasn’t even scored yet either! Then once it was scored the odds moved to 1.82. So it would have been good value to back Man City in that situation and risk 2 ticks to win about 13 if Lampard did miss.

Lampard, of course, didn’t miss but that’s not important as we are just looking for low risk opportunities. Using the Winners market might actually be a way to lay a player taking a penalty if the markets are going to “assume” its going to be converted. Not all matches will impact on this market in this way but its something to bear in mind for the future. 😉

After that, the price on Man City drifted till they hit 1.91 at the final whistle before bouncing back in by this morning. Another example of a correction from a market over reaction. If you did take on Man City at some point then you could be in a pretty strong position at the moment. This is when you consider that Man City have to play Arsenal on Sunday after Man Utd play QPR. Chelsea also have a run of pretty easy fixtures to come with only an away match at Spurs looking tricky for the blues until at least February.

By Sunday night, you might even see the Red side of Manchester back on the top of the table which could potentially see the two teams swap places in the market. Probably, a bit of a stretch of the imagination but remember to take this type of trading one game at a time since you have plenty of time to exit your position even in-play if you wish!

Something that is often mentioned on blogs and forums that discuss Betfair trading is the need for a “big bank” in order to be successful. I am not sure how big a big bank is but I would assume we are talking about a 4 or 5 figure bank. Is this really right though? Do…