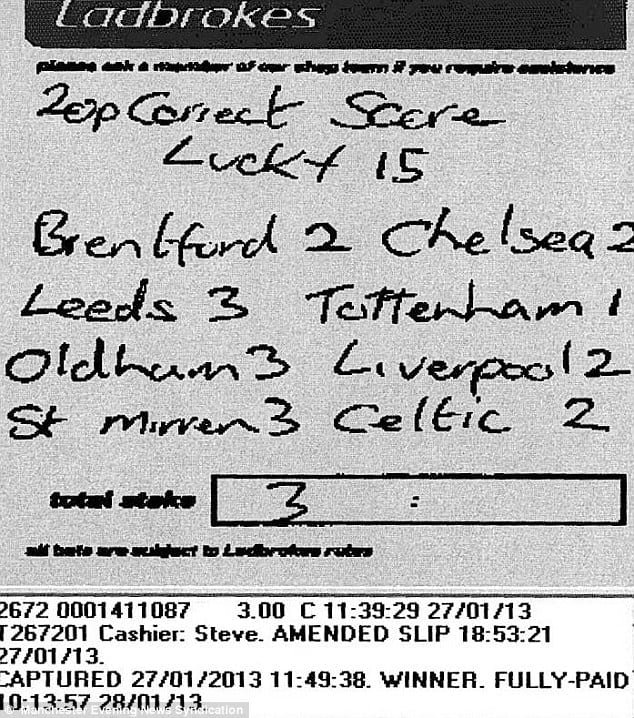 One unlucky punter has been denied a huge win of over £500,000 on a single accumulator but, thankfully, this was not by a begrudging bookie.

The gambler was actually denied this huge windfall by the whistle of Referee Kevin Friend!

The Premier League official denied the punter the huge windfall after blowing for full time just one second before a crucial goal went in.

A man from Oldham, who does not wish to be named, had put a wager on a series of unlikely scores in cup football matches this weekend including Leeds United to beat Tottenham 3-1.

Incredibly, all the results had come in except the match at Elland Road which seemed destined to finish agonisingly close at 2-1.

But in the dying seconds of injury time, with Spurs ‘keeper Brad Friedel up for a corner, Leeds cleared the ball and it was left to midfielder Rodolph Austin to pump it into an empty net from long range.

He duly took his shot, but just one second before the ball rolled across the line the referee signalled the end of the match.

The accumulator bet, which also included Oldham to beat Liverpool 3-2, Celtic to get knocked out of the cup by St Mirren 3-2 and Brentford’s 2-2 draw with Chelsea, would have netted the unlucky gambler £506,562 if the goal had gone in.

Alex Donohue, of Ladbrokes, said: ‘The referee has ruined our punter’s dream.

‘Seventeen grand is sweet enough but he was literally one second away from having his life changed forever.’

Thanks to the Daily Mail for that snippet.
I was particularly interested in this little story as I was also denied a nice win on that match after laying 2-1 @ 1.05 in the dying moments. At least this punter picked up some money for his troubles as I only got a £50 loss for it all at the end of it!
You win some, you lose some!

Many ask about just which are the most profitable tennis trading strategies of all. BONUS: Discover the Cash Out SECRETS that Betfair do NOT want you to know! 100% FREE eBook for you! CLICK HERE! There are actually many different methods for trading tennis on Betfair and so in this video we wanted to demonstrate…