Tuesday was a washout in the Tennis but the timing wasn’t so bad as there was a whole evening worth of football to keep us entertained. I, like most of the nation, watched the England-Wales match and it got me thinking about a new strategy I have been toying with. As we all know, England won but failed to impress as per usual! 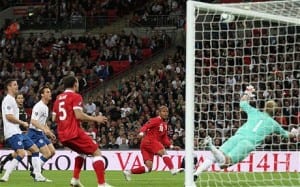 There are many times in a football match where you will see a short priced favourite under perform but still win and this can be quite annoying. Last night England started the match priced @ 1.16 and went as low as 1.07 when they took the lead. However, the 1-0 lead flattered England and I could see on Twitter that many people were now laying England at those short odds in case Wales actually managed to equalise.

From a personal point of view, as soon as the match started I could see England were playing badly however I still expected they would sneak the win so having a Lay bet on England certainly didn’t make sense. This was similar to recent matches I have watched such as Chelsea-West Brom and Arsenal-Udinese.

So what do you do when a short priced favourite isn’t playing well but you still think they will win?

Well after the opening 15 minutes, I tweeted that I would look to the In-play Asian Handicap markets and to back Wales with a + handicap. Amazingly, you could still get around 1.80 on Wales +2/2.5 after about 25 minutes of play which looked like amazing value considering what I was seeing on my TV. With this bet, it meant that England had to win by 3 goals or more to lose my whole stake. You could let that bet ride or just wait till late on in the match to green it up depending on how things are going. With England hardly threatening in the second half I let it ride all the way down to 1.01 as my trade never looked under threat.

The best thing about backing the underdog with a + handicap in these situations is that the market is immediately moving in your favour. If you lay the favourite in match odds then you are spending a lot of time hoping for the underdog to score a goal which might be a bit of a long shot in some cases.

There certainly seems to be value in the in-play Asian handicaps as it’s not a market that many regular punters would ever think about betting on. A friend of mine who is a professional punter was actually surprised when I showed him that the Asian handicap markets go in-play! The only gripe is that there is often poor liquidity in these markets for the average match and so trying to get a good price when getting out in a hurry could be quite tricky.

So, the next time you are watching an over priced favourite struggle against a huge underdog, have a look at the Asian handicap markets when it’s in-play and consider using that as an alternative to laying the favourite!

Welcome to BIG announcement number 2 regarding Ultimate Football Trading, if you missed the previous announcements then you can check the first one here and the second one here. BONUS: Discover the Cash Out SECRETS that Betfair do NOT want you to know! 100% FREE eBook for you! CLICK HERE! One of the most well…

A sensational night in the Champions League with Dortmund supplying us with late drama that caused absolute carnage on the Betfair markets. BONUS: Discover the Cash Out SECRETS that Betfair do NOT want you to know! 100% FREE eBook for you! CLICK HERE! Heading into injury time and with Malaga leading 1-2, Dortmund needed to…