The sending off market is not the first market you will think of when it comes to trading on Betfair but it is one that I dabble in from time to time and with good success. I am going to reveal a few sneaky strategies I use on this market to provide some high rewards from a relatively low risk to my stake.

First thing I will say is that these are not “trading” in the traditional sense but just ways to profit from this market at a minimal risk. Liquidity on this market is never great so keep this in mind with your staking so you are not stuck when it comes to trading out and try and keep it to the big televised matches only.

What I often do on this market is look for matches that I feel will be tense and have a good probability of lots of yellows or a straight red card being shown. I do not have stats on this and go with my common football sense by going for derby matches, matches with a tense rivalry, big occasions (world cup etc) and high pressure matches. Think, Liverpool-Man Utd, Celtic-Rangers, Lazio-Roma, Barca-Madrid etc

Then I will lay sending off – NO but the trick is not to lay right at the start of the match. I wait until 20 minutes in before doing this as usually the odds will have gone lower by this point. Mainly because referees in these high pressure matches do not like to give out cards very early on and they will usually let things slide a bit in the first 20 minutes. The price I lay at is usually between 1.20 to 1.40.

Once I am in the market I am looking for at least 2 things to happen. I want the tackles to start flying in and a few yellow cards to be shown which will cause the price on “NO” to rise higher and usually by half time I can green up the book. 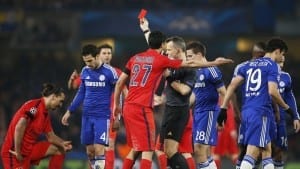 Or even better I am looking for a straight red card to be shown. These are the BIG bonus wins that happen sometimes as that means I immediately take 100% of my lay stake. Chelsea-PSG in the Champions League was a good example of this recently as I knew this would be a rough match after the first leg and so I did a lay of “NO” in around the 10th minute. The game got dirty after that and I was looking forward to locking in a profit at half-time but then Ibrahimovic was sent off in the 31st minute and I pocketed my stake.

What I like most about this strategy is that even if the first half does not turn into the card-fest that you wanted you will find the price has not moved against you that much by half-time and by then you can exit the market for a small loss. Or, even better, leave your loss on “NO” so that if a red card is shown later in the match you will take no loss at all!

As said, you are really looking for the straight red card to be shown to profit significantly and by trading this market in this way you are either getting a FREE opportunity at this happening or a very low risk one.

If I am watching a match heading into the final 10 minutes and there is one team desperately chasing the match then I will look to make a cheeky small lay on the “Sending Off – NO” market at some very low odds by this point. Usually the price on a sending off can be less then 1.10 but you will find that lots of red cards will happen at these late stages especially when there is a team chasing the game.

Frustration can kick in, players can get tired and in the final minutes of the game you have a much better chance of catching a sending off.

Remember, I only ever do this if I am watching a match and can see a team is chasing a match and looking desperate at the same time. If it has already been a tense contest then that just encourages me even more.

This is a straight lay with no exit point as the value is there if you pick the right situations.

3 – The Calm After The Storm 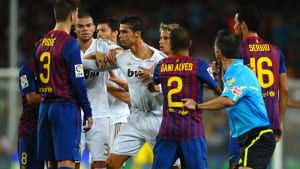 Sometimes I will being watching a match that has a few flashpoints in a particular period of the match and the referee has shown a few yellow cards. This causes the markets to overreact and you will see “NO” drift out in price. In some cases it can go as high as evens.

In these cases I like to BACK “NO” and then with time the price will steam once again as the game will inevitably calm down. The markets will feel that a red is imminent since so many yellows have been shown but you will often find that players are not stupid and will be more careful once these yellows have been brandished. You should then get about 20 minutes without a red card being shown which is usually enough for the markets to steam back to a price you can green your book up at.

Just be sure to get out and then go for the “The Late Red” heading into the final 10 minutes. Use the profit you made from this strategy for a free chance at this too 😉

The sending off market is not for everyone and it is definitely not a market you should focus too much time on. As mentioned, liquidity is only ever good in the televised UK games I only ever turn to it when I feel an opportunity is imminent based on what I am seeing on the pitch. Red cards do not happen in every match also, so that means you have to be patient with this method. It is one where you will take lots of small losses but then you will catch a big win or two that makes it all worthwhile.

I mainly use this method alongside my main strategies which include the CORE method. You can read more about my Core Method and other strategies in my Dynamic Football Trading Package.  For a limited time only, use promo code STL25 to receive a 25% discount.

Competitive football makes a comeback from today with the Championship and also the German Bundesliga kicking off. The German league is certainly one of my favourite leagues due to the high goal rate. I can’t quite say the same about the Championship though as I feel its often one of the hardest leagues to predict….