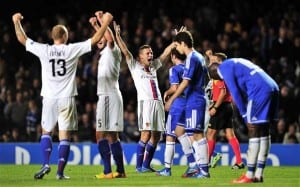 There was some great action in the opening round of the Champions League this week. These matches are a dream for football traders with the simultaneous kick off times making it a great way to spend an Autumn evening.

The biggest shock was definitely the fact that Chelsea were beaten by Basle at home. Even Chelsea failing to win would have been surprising enough considering they were 1.38 favourites at kick off.

After a pretty even first half, Chelsea took the lead and they went into 1.18 for the win. Definitely seemed very short considering that Basle were having a good amount of the ball and creating some good attacks.

In the end Chelsea went as low as 1.13 before the Basle equaliser. If you were watching the match you could see “it was coming” and it was a great low risk laying opportunity if you took it.

After the score went to 1-1 you would have expected Chelsea to turn up the heat but it was actually Basel who looked more likely to score. However, the markets at this point had Chelsea as 2.5 favourites for the win and Basel were still 10.5 shots. One of those situations where the markets were drastically wrong but were “forced” into giving those prices due to the starting prices of the sides.

In the end Basel did take the lead and even when winning 2-1 the lead was not really threatened which just underlined how poor Chelsea were. This is actually the first time they have ever lost their opening group match in the champions league.

By the way, Basel have history with Champions League gubbings. Man Utd were up against them at Old Trafford back in 2011 and traded down to 1.02 but Basle managed a 3-3 draw that evening before eventually knocking them out in the final group match.

For the record, Basel were matched as high as 140 in-play, albeit for £3 but plenty of good money was matched @ 60 and above.

Well, Friday was disappointing but also not surprising either as Andy Murray exited Wimbledon. It was groundhog year yet again for Andy as he went out in the semi-finals to Nadal after losing 3-1. This was despite winning the first set and going on to trade down to 1.70 before the collapse began. BONUS: Discover…

Trading football PRE-MATCH really should be the main focus of your trading on Betfair. Once you get into the swing of it there is plenty of money to be made with it and it is certainly not as hard as some people make it out to be. From all the emails and messages I get…

The “NEXT MANAGER” markets on Betfair can pop up from time to time whenever a manager leaves a high profile club and these markets can be full of opportunities but they can also be quite tricky to trade profitably too. Some would argue they are markets that are governed by inside information which is true…