2012 was quite a fantastic year of sport and there has been some truly amazing sporting moments. As usual there has been some incredibly exciting action on the Betfair markets and below are 6 of the very best gubbings that we have witnessed in the past year. These are in no particular order and are rated purely on the drama that they created. 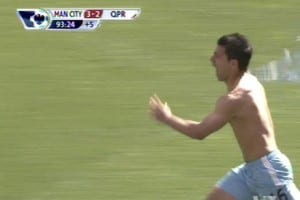 What better place to start then with the extraordinary way in which the Premier League title was won.  We all know exactly what happened on the pitch but, unless you are a football trader, you will probably be totally oblivious to the carnage that was unfolding on the Betfair markets.

Before the Man City-QPR match even kicked off, Man Utd had already traded as low as 1.03 to win the title but now it was Man City who were the overwhelming favourites and they went into the match as 1.15 favourites to take the trophy.

With the clock ticking down and Man City needing 2 goals to win the league we saw Man Utd trade all the way down to 1.05 in those final seconds and Man City were matched at odds higher then 100 before Aguero struck in the 93rd minute. Amazing stuff and it was documented in the weekend wrap back in May if you want a closer look.

Many football traders made a serious amount of cash from this one, unless you were one of those backing Man Utd of course!

This one was notable for the fact that Rafael Nadal had over £1 million matched on him @ 1.01 and still managed to lose his match against Verdasco.

He actually started this match as a 1.04 favourite and over £3 million was matched from that price down to 1.01 but the money buyers got seriously stung as Nadal choked in unusual fashion.

It is certainly not every day that you see over a million matched @ 1.01 and go on to lose. This was potentially the most expensive gubbing of the year for the money buyers.

Have a closer look at this one including the chart here. 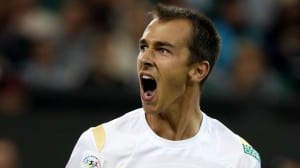 Nadal once again and as you can tell it was not the greatest year for the spaniard. It was no surprise that this match was his final appearance of 2012 as he took the rest of the year of through injury.

On the back of his recent beating by Verdasco many sensed that something was not quite right with Nadal but not many would have possibly expected he would exit Wimbledon at such an early stage and to a player that many had never previously heard of either.

Nadal started this match against Rosol as 1.02 favourite but made a serious meal of the opening stages. If you were watching this match then the opportunities to lay Nadal would have been slapping you in the face throughout. Rafael Nadal comfortably traded down to 1.01 on this one albeit not for a million this time however there was over £5 million matched from 1.05 downwards.

In football terms it is the equivalent of Spain being knocked out of the World Cup by Luxembourg! 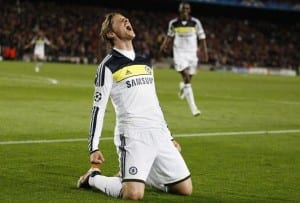 Chelsea knocking Barcelona out of the Champions League certainly caused a huge stir for punters during 2012. Especially considering the manner of how they went about it.

Chelsea went 2-0 down and down to 10 men in the Nou Camp which saw the markets decide that this one was pretty much over.

When Chelsea went 2 goals down it felt like it was a matter of how many Barca would then score but football has funny ways of surprising you. If you were one of those who lumped on Barcelona in such a big way that day you would have been left as sick as a parrot on this one.

Some have called it the most amazing sporting comeback ever witnessed and it must be up there with the best. In this one,  USA traded as low as 1.06 with a cool £1 million turned over @ 1.13 and 1.14. The tie traded as low as 1.12 after being as high as 80. The eventual winners were Europe who traded as high as 27 in-play, yet it was such a tight finish they never went lower then 1.20.

The in-play odds doesn’t quite make this one of the most amazing comebacks of the year if going purely by the markets but there is no doubt that this event and the comeback was special for so many reasons and it will live long in the memory for those who witnessed it.

When the pre-match favourites are Germany and they are leading 4-0 at home with about 30 minutes left to play then backing them to win @ 1.01 must feel like you are buying money and you will be laughing all the way to the bank.

Well those who backed Germany in this situation back in October 2012 could not have been laughing at all.

The Draw price was matched @ 1000 and the person who was laying @ 1000 was probably on suicide watch after this one.

The strangest part about this one was the fact there were literally no warning signs that Germany might collapse. No red cards or previous history, it really was a big shocker.

Goal after goal came for Sweden and they managed to pull it back for a remarkable 4-4 draw. 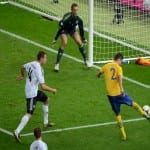 There were many more remarkable moments on the Betting Exchange markets during 2012 that never made the cut. Let’s hope for more of the same during 2013!