Who said International breaks were boring??

There was some quite insane in-play action last night and more then a few crazy prices were available if you like a long shot.

The most spectacular of all was, arguably, Germany’s failure to hold on to a 4-0 lead when playing at home with less then 30 minutes left to play.

With Germany 4-0 up, they were trading @ 1.01 and the draw was looking pretty comfortable sat at 1000 for those who fancied laying it in order to “buy” some money. 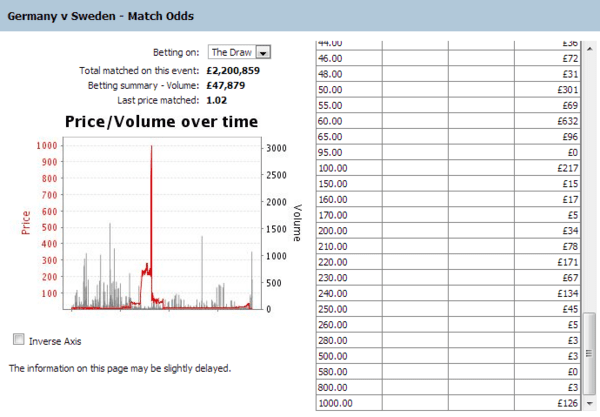 Spain had not failed to win a qualification match since 2007 and with them 1-0 up and just seconds left on the clock you would have expected they had clocked up yet another victory.

However, one goal was only the difference and in football anything can happen.

France equalised with virtually the last kick of the ball after Spain had traded as low as 1.01 and The Draw traded as high as 80. As you can see £31k was traded @ 1.01 in this one.

Not sure I would want to be backing @ 1.01 when the difference is only the single goal, perhaps I might do that if the difference was 4 goals, oh wait….

The early evening match was on in the background on ESPN and not much was happening in it for me to be interested.

That was until injury time set in and with Serbia needing a goal to stay in the tournament they were going hell for leather to get it. I had a quick lay of the Correct Score as injury time approached and then topped up my lay @ 1.05 when Serbia had a free kick going into the box with the goalkeeper and every other player in the box. This left an open goal at the other end which made you feel that there would likely be goal at either end result.

In the end the free kick was cleared and England walked the ball into an empty net. The 0-0 scoreline actually traded as low as 1.03 in this one.

The biggest starting price to be turned over was Portugal who were trading @ 1.07 BEFORE kick off to beat Northern Ireland but slumped to a 1-1 “defeat” after a very poor performance. The draw was matched as high as 17.5 in this one.

After nights like this you might start to feel that you have seen it all when it comes to in-play betting!

One of the most frequently asked questions I get is, “How long will it take to start making money from Betfair trading?”. BONUS: Discover the Cash Out SECRETS that Betfair do NOT want you to know! 100% FREE eBook for you! CLICK HERE! It is the type of question where the answer “How long is…

Knowing how much to trade with on Betfair is always a tricky subject. If you have a small bank to trade with then your profits will not be very significant but at least you are not risking too much. Whereas if you want to make significant profits then you need a bigger bank but not…

We all know that Lionel Messi is already one of the greatest footballers that ever lived and much of Barcelona’s recent success might not have been possible without him but does this mean that Barcelona are a one man team? BONUS: Discover the Cash Out SECRETS that Betfair do NOT want you to know! 100%…