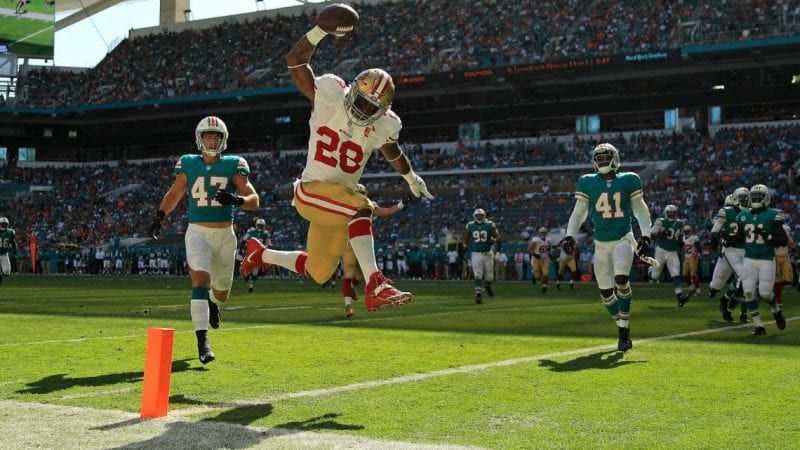 As a trader with over 9 years trading experience I have pretty much tried all sports and now settled on my core trading sports, one of them being American Football or, more commonly known as, NFL. In this article I am going to share one of my simple trading strategies for this sport so you can get going on trading this fast growing trading market.

I have to admit… NFL is a sport I love, I have been watching it years! I love the rush of it and I love that it’s stats based as well you can critique it down to so many stats so when I started trading it I was amazed at the detail you can go into. However, you do not have to love the sport as much as I do in order to trade it profitably.

If you didn’t know NFL is one of the fastest growing sports in popularity in the UK and the TV deal with Sky has helped a lot, especially with the money coming into the games. With most of the matches taking place on a Sunday evening UK time it is the ideal way to finish off a sports trading weekend and currently it is a very easy sport to trade!

It is essentially a very easy trade to follow – I Lay the first team to score.

An American Football game starts with a coin toss the result of this is who will receive the ball, if you win this coin toss then you are given four opportunities to move the ball 10 yards, if you reach this yardage then the team is given another 4 attempts until they either score a touchdown or kick a field goal or if they haven’t got a scoring opportunity they will punt the ball away.

We have placed a lay on the first team to score, why you might ask?

Because they now have to defend

Their opponent is fired up to counter and get the touchdown

We don’t actually need a touchdown to get a profit – the mere threat of one will move the price to 1.30 and if they do actually get a touchdown they will go back to their starting price of 1.50. Leaving us with a very nice profit locked in.

This is why I like to lay the team who scores first, it is low risk but high reward and works most of the time. Remember though, spending some time researching the teams and who is playing can always help with this!

One of my favourite trades ever in the NFL was when the Colts played the Broncos in a divisional playoff game as well – so both teams were good teams, the Broncos started this game very well and guess what? They scored the first touchdown, they had drawn first blood – their price hit 1.17!

I placed my lay @ 1.17 and it was soon taken, the ball was now kicked by the Broncos to the Colts for them to start their attacking drive and boy did they deliver they moved the ball down the field and they scored a touchdown, this gave me an exit point of 1.60 – a huge move!

We love trading the NFL inside the BTC and have some resident experts who know the teams and the players who share their information. That is key with any trade to take it to a higher level you have to know the situation and numbers are key to this, research a game, do the homework and do not try this blind on every game every week as it won’t work, look for teams who are evenly matched and have their key players playing – you can find this information in ESPN, finding the roster for each team and it will give you the depth charts for each team so you can see just who is a top player on each team.

If you have any questions about NFL trading pop them below!

This was a guest post by Ryan Carruthers.  He has been sports trading professionally for over 9 years and he created BTC to be a traders haven so people can talk trading and not feel like their question are stupid. His favourite trading sports are Football, Tennis and NFL!