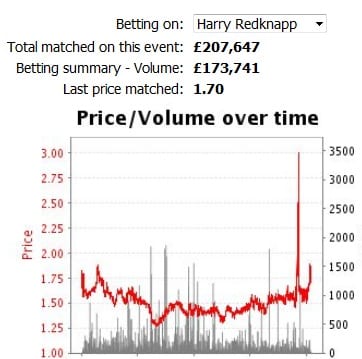 It has now been just over a month since Fabio Capello walked out on England and the markets opened on the next England manager. As you probably guessed, Harry Redknapp was, and still is, the strong favourite to be the Next England manager but a month is a long time in football and the markets are clearly starting to get a little bit twitchy and the price on Redknapp is starting to drift.

I outlined in this post that with the price on Redknapp being so low when the markets first opened, yet the market 4 months away from being settled it was likely that his price would trade higher in the meantime. Redknapp actually traded as low as 1.27 in the markets and at this time of writing he is priced @ 1.75.

In that post above I mentioned that “with Spurs fighting for a Champions League spot, announcing that your manager is leaving at the end of the season would be a surefire way to affect performances.” Well, it looks like I was right to an extent as Spurs performances clearly havent been what has been expected of them and this is clearly an impact from all the speculation.

This run of very bad results for Spurs has led many to question if Redknapp is even the right man for the job and then yesterday the man himself, apparently, said he “wasnt sure” about taking the job. In the meantime, the red tops are regularly throwing new names into the ring which is great for those who were opposing Redknapp as it just adds to the drift as the markets panic a bit.

My view is that those who are backing Redknapp as the Next England Manager might end up being right but still might not get paid out.

The rules on Betfair for this market state…

if the English FA do not appoint the next national coach before England’s Euro 2012 game against France on 11 June 2012, Betfair will settle this market on the person who is responsible for picking the English National Team against France on 11 June 2012, even if that person has been appointed by the English FA on an ‘interim’, ‘caretaker’, ‘temporary’ or similar basis, including an appointment limited to the build-up and/or the duration of the UEFA Euro 2012 Tournament.

So you are really betting on the fact that Redknapp will be taking over the England job BEFORE Euro 2012 starts.

If you were Harry Redknapp would you really want to rush straight into a major tournament when the season ends? Leaving you no time to form your own team and instill your own ideas? Knowing full well that if England fail badly at this tournament then the press will turn on you and you could be out the door before you even got started?

I know I wouldnt.

I expect that if Redknapp was to be the next England manager then he would want to take over AFTER Euro 2012.

When you keep all this in mind then the price on current caretaker manager Stuart Pearce @ 10 looks like a great bet.

So, if you are thinking about getting involved in this market I think the real question really is, will the next england manager want to be in charge before or after the Euros?

Even if it ends up being Roy Hodgson (8), If you were the new manager would you want to risk taking charge for Euro 2012 and being out of a job within a month if England get knocked out early or perform poorly?

One thing is for sure, those who have backed Redknapp with 4 figure sums at odds of 1.40 and below will be doing a lot more twitching then the man himself right now!

Today we speak with STEVEN HALL who is the author of the football trading course “Dynamic Football Trading“. He gives us a unique insight on what he feels it takes to trade football profitably these days. BONUS: Discover the Cash Out SECRETS that Betfair do NOT want you to know! 100% FREE eBook for you!…

Its not an understatement to say that the Christmas period has been pretty insane as far as results have gone in the Premier League. BONUS: Discover the Cash Out SECRETS that Betfair do NOT want you to know! 100% FREE eBook for you! CLICK HERE! I took the holiday period off from all things trading…