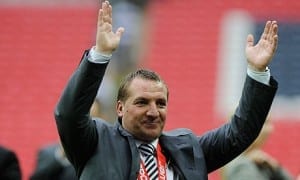 It finally looks like the managerial saga involving Liverpool and Aston Villa is finally over and, as usual, these have been very interesting markets to trade.

My view on trading Next Manager Markets is that you are often competing against people who have more knowledge then you and so finding value for an outright bet is almost an impossibility.

However, from a trading perspective there can be opportunities galore due to the amount of volatility and over reactions that can occur.

My main strategy for trading these markets is to lay the first clear market favourite which is usually the person who trades below 2 first. I wont put in an order at 2 but just assess the markets when significant news breaks. For some reason, you often find that the instant favourite in these situations is not usually the man who gets the job. This could be the newspapers throwing names in the air to make sales, or even clubs throwing names out there in order to put people off the scent of the true target.

This could even be gamesmanship to make the true target a little bit more eager to seal the deal if he feels there is competition for the job.

When trading these markets all you want is to oppose the early favourite and hope for a bit of market doubt that will see the price trade higher and a profit locked in.

We saw a good example of this with the England Manager Market earlier this year.  Harry Redknapp was the instant favourite for the job and traded as low as 1.27 but the market doubt crept in and he traded up to 1.75 and then eventually never even got offered the job!

In this latest saga, there were similar instances.

Brendan Rogers has now been confirmed as the new Liverpool manager but he was an outsider during much of the race.

These were some of the prices that certain managers hit in the Liverpool market. Villas Boas was actually the first man to trade below 2 and Martinez hit as low as 1.36 and never got the job.

The Aston Villa market has been interesting also with Ole Gunnar Solskjaer the first hot favourite for the job before turning it down. It is now look likely that Lambert will get the job and he is 1.10 to do so.

Low Prices In this market were:

It does not stop there as Betfair now have a “Next Chelsea Manager” market up. The current favourite is Roberto Di Matteo @ 3.75 but surely if he was going to get the job then there wouldnt have been such a delay with the announcement?

The Chelsea market might not throw up the same opportunities as others since you have to expect Abramovich has had something up his sleeve for a while and the first strong favourite might well be the guy who gets it this time.

Anyway, I am sure this will be an interesting one to observe!

The gubbings continued in the Paris masters with Andy Murray the latest victim to be turned over after trading @ 1.01. BONUS: Discover the Cash Out SECRETS that Betfair do NOT want you to know! 100% FREE eBook for you! CLICK HERE! As mentioned after Djokovic was beaten @ 1.01, this tournament is not one…