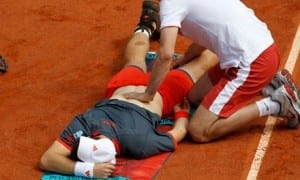 After talking recently about the many opportunities that can crop up when trading tennis on Betfair, we had another one today when Andy Murray appeared to be injured and on the brink of retirement yet came back and won the match.

Andy Murray started this match as a 1.10 favourite and I thought he might struggle or get off to a slow start. So I had a lay of Murray from the start and then could not believe my luck when it appeared Murray was injured and the markets wildly over reacted as Murray drifted out to around 3.5!

With the score 4-0 to Murray in the first set, I was all green however Betfair will void the market if the match does not complete the first set. So I could not celebrate yet and I was forced to sweat for a bit as Murray literally could not move and you felt he would give up at any moment.

Eventually Murray limped to the end of the 1st set and everyone was expecting him to give up at that point. With the first set complete, the money buyers were out in force and crashed the price on Niemenin down to as low as 1.04!

Then, strangely, Murray never gave up and carried on preparing for the second set.

This sent the markets into panic and I was glad I was safely out of this one by that point.

Those who backed the underdog at such low odds would have been seething as Murray then wiped the floor with him and won the match 3-1.

I am of the view that the markets can over react to injuries in Tennis. I often find that when a player picks up an injury but carries on then the injury is not usually that serious and so you can actually suddenly find favourable value in backing the “injured” player at these points, especially if it is the favourite.

I am not sure what Murray’s injury was but after an injury time out and a dose of pain killers then it is not likely to bother him for the rest of the match and I personally know I missed out on a great opportunity as I was a little bit bewildered by what was unfolding in front of me.

Also, Murray has history of appearing injured, having a break and then romping to victory. He did exactly the same thing against Berrer in last years French Open.

One thing is for certain when trading tennis, at odds sub 1.15 it is definitely better to be a layer then a backer since you really do not know what might happen during the match.

These players have a low Starting Price since they will usually win, however an awful lot of things can happen during the match to put that price into doubt and secure a profit for the traders!