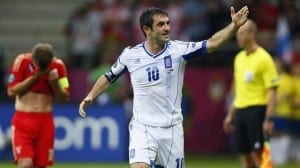 There were plenty of red faces on a lot of punters last night as Russia were eliminated from Euro 2012 at the group stage. This was something hardly anyone saw coming and it certainly made for a really exciting climax to group A.

After impressing many people by beating the Czech Republic 4-1 in the opening match Russia traded as low as 1.02 to qualify for the next phase. Easy to say in hindsight obviously, but that was clearly a huge over reaction simply based on the way they won the match. If you win a match 4-1 or win it 1-0 it still counts as 3 points and you still have a job to do in the other two matches.

After starting the tournaments priced around 28 to win it they traded as low as 11.5 in the winners markets and clearly all this was based solely on that victory over the Czechs. Even before the match last night it seemed like everyone was suggesting it was a case of “who is going through along with Russia” but you can really never assume anything in football.

You never know, it could be Germany next!

Group A appeared to be the least entertaining group on paper but has proved the opposite in reality with some good price moves too. Here are some of the market numbers.

The Czech Republic traded as high as 3.75 to qualify after the opening match defeat to Russia.

Russia traded as low as 1.02 before crashing out.

Poland touched a low of 1.26 despite not winning a match so you have to assume that was an in-play over reaction.

Greece touched as high as 16 to qualify before “surprising” all of Europe once again.

Have a look at this screenshot below from the Poland-Czech game. You will see that when Greece took the lead in their match against Russia this caused the draw price in the Poland match to rise also. The markets realising that now neither team could play for a draw and hence all the draw layers came out in force and there were some easy ticks to be gained if you were on the ball. The price touching 2.58 before drifting out to 2.76 after the Greek goal.  It is quite interesting how events in a separate game can influence the markets in another.

Watch out for more moments like these over the next few days as the drama is not over yet!

It was another superb match for in-play trading between Real Madrid and Bayern Munich with the markets slightly over reacting to what appeared to be a strong Real Madrid start to the match. BONUS: Discover the Cash Out SECRETS that Betfair do NOT want you to know! 100% FREE eBook for you! CLICK HERE! With…