Arsenal are trailing 4-0 from the first leg against AC Milan and they are certainly “up against it” if they are to progress tonight. Can they pull off the most spectacular comeback in Champions League history and overturn the 4 goal margin?

Well, probably not but as in-play traders we could still benefit if AC Milan do have a bit of a wobble along the way.

So, you could lay @ 1.04 and if Arsenal take an early lead I expect that price will rise to 1.10 at least which could put you in a risk-free position. For example, you could lay 1.04 with £100 and then back @ 1.08 with £50 and you will have a risk free £50 riding on the Arsenal qualification. Then, if Arsenal do score another you can start laying off and equalising the profit as the price gets lower. The main aim would just be to try and remove your liability primarily.

This type of trade would be a good one to try if you feel Arsenal will actually win this match. Arsenal are actually in some superb form at the moment and this match could have arrived at a good time for them. Everyone thinks they are already out so they wont be going into this match under any sort of pressure. If they can find the same sort of spirit that saw them put 5 past Spurs inside 35 minutes then they should be able to at least win the match and cause a bit of market panic at the same time.

Arsenal are 27 to qualify which is quite a long shot but from a trading perspective you have to expect they will trade lower and we will get an opportunity to profit at some point.The big decision is which point to trade out at and that purely depends on how the match is developing. 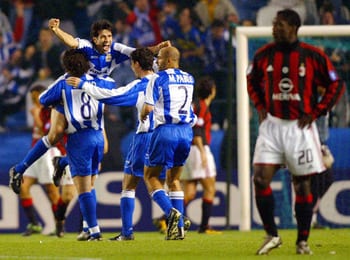 AC Milan actually have previous when it comes to throwing away huge leads in the Champions League. We all remember when they threw away a 3-0 lead against Liverpool in the final in 2005. Some with longer memories might remember the time when they beat Deportivo La Coruna 4-1 in the first leg and then duly lost the second leg 4-0 and were eliminated in 2004. Not that its the same players involved in this match but its an interesting fact to bring up! 😉

Its going to be an interesting night of football trading ahead with the Birmingham-Chelsea FA Cup replay live on ITV too and also a full program of Championship matches.

Good luck whichever positions you decide to go for!

Trading the Under 2.5 Goals market on Betfair is one of the most popular ways to trade time value in the football markets and you can learn more about it in this video. BONUS: Discover the Cash Out SECRETS that Betfair do NOT want you to know! 100% FREE eBook for you! CLICK HERE! Some…