Well, it was a night of fun and games trading on Betfair last night.

Mainly because at one point almost every match in The Championship was suspended for considerable lengths of time. Yet again, this causes many people to blame Betfair for poor service but in their defence this wasn’t actually down to them.

As far as I know, the live feeds to many of the football league matches were lost last night and other in-play bookmakers such as Bet365 and William Hill were affected also. So when Betfair cant view the matches themselves they don’t allow them to go in-play.

I am not sure why Betfair really do need to monitor the matches when they are in-play. They are an exchange after all and if people don’t feel comfortable putting their money in an un-monitored market then they just shouldn’t get involved. I am sure most would feel much more comfortable putting their money in the markets knowing they WILL have a chance of getting it out at some point rather then worrying that Betfair will suspend and your money is locked away for good. So the reasoning for suspending matches which cant be monitored appears to be a bit backwards.

Anyway, I didn’t have any involvement in these matches so no harm done for me, but some could have lost their shirts in these situations. 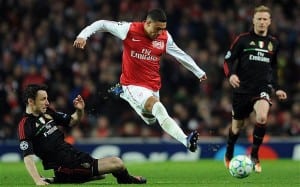 My proposed trade on Arsenal went really well and I hope some of the readers followed it. At the end of the day it was a 4 tick risk with 90 minutes of football still to play and these are the sort of low risk trades that are my “bread and butter”. When it went to 3-0 at half time I “greened up” but left double the amount on Arsenal as I felt they would go on and score a 4th but in the end it never transpired.

So an excellent profit was made in the end but the 4th Arsenal goal would have been the icing on the cake!

Plenty more action on the cards tonight, hopefully some more drama too!

The gubbings continued in the Paris masters with Andy Murray the latest victim to be turned over after trading @ 1.01. BONUS: Discover the Cash Out SECRETS that Betfair do NOT want you to know! 100% FREE eBook for you! CLICK HERE! As mentioned after Djokovic was beaten @ 1.01, this tournament is not one…