Pretty much everyone was expecting that Serena Williams would cruise to US Open victory against Azarenka in the same manner she had cast away all her previous opponents in the earlier rounds. Thankfully, we ended up with one of the best US Open women’s finals in recent history.. 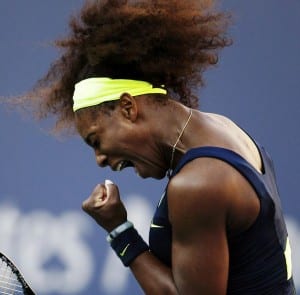 Early on it certainly appeared that it would be only going one way, Williams started as a 1.25 favourite and steamrollered the first set 6-2 which made her trade as low as 1.07 in the opening set with a cool £1 million turned over @ 1.08 also.

At this point you really could not see any sort of way that Azarenka could get back in the match and despite Williams being priced @ 1.07 it did not look like a price you would want to be laying. The situation was actually set up nicely for a “Double Back” trade but with the way Serena Williams was playing you would probably have been crazy to go against her. Personally, I did not get involved at all until the 3rd set in this match.

Those who were crazy, or just astute enough, to lay Williams going into the 2nd set were rewarded as Azarenka began to take control and more then matched her opponent. After watching Serena Williams blow all her competition away in the Olympics and at Wimbledon it was refreshing to see someone push her all the way for a change. There really was no indication of this in the first set so it would be interesting to hear the reasoning from anyone who did lay Serena at this point.

Azarenka took the second set and now Williams drifted out to 1.50. This was the first time in the US Open where the price on Serena Williams had more then doubled its starting price. Those who had backed her as low as 1.07 must have had very sweaty palms from this point onwards.

The final set was set up nicely from a tennis trading perspective and with the pressure getting to Serena Williams there were some great prices on offer frequently throughout the 3rd set as you can see.

If you have read this article on tennis trading entry points then you will know that serving for the set or for the match is a great time to lay the server due to the pressure involved.

In fact, just Williams scoring the first point in this situation sent the price up to 1.60 which would have made a good trade on its own if you wished to exit at that point.

In the end, Serena Williams did prevail by breaking Azarenka when she was serving to stay in the match and a classic final came to an end. There was £29.6 million matched on this and plenty of opportunity for even newbie tennis traders to have made money on this one. For the record, Azarenka traded down as low as 1.17 which shows you just how close this match was a contest.

Roll on the men’s final!

I really enjoyed doing the recent interview with Greek Investor Jim Makos. The best thing about doing these interviews are the little gems of information that can be learned from them. I often read interviews a few times to try and “read between the lines” to see what else can be revealed. There were a…