As you know the draw for the quarter and semi finals of the Champions League took place on Friday and it was interesting to see how the Winners market reacted to the news.

This was the market BEFORE the draw: 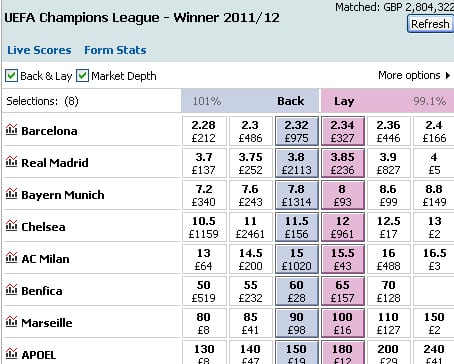 The draw was made….

And then this was the market AFTER the draw (Spot the difference?): 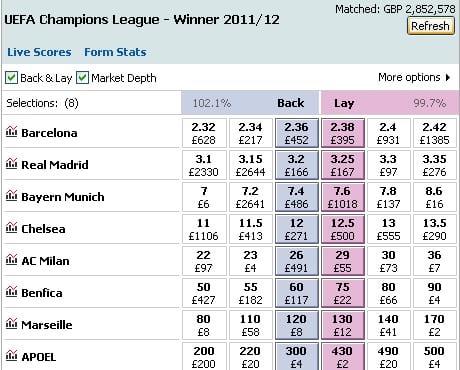 The main mover was Real Madrid who moved in from 3.8 to 3.2 as they have a virtual bye into the semi-finals since they are playing APOEL. Then they will potentially play Bayern Munich and I expect Madrid should have enough to get through that and reach the final.

It was interesting that the price on Barcelona @ 2.36 hardly moved despite a tricky draw against AC Milan.  You obviously have to see Barcelona as favourites to get through that but I don’t think it is as clear cut as most people will expect.

Milan managed to get a draw in the Nou Camp earlier this season which is no mean feat and they lost by a narrow margin at home. As long as AC Milan don’t play like they did in the second leg against Arsenal then it could be a competitive tie and a test for the Catalans.

Then if Barcelona get through that they will face Chelsea in the semi-finals. Despite the poor season for Chelsea you have to now see them as “revived” under Di Matteo and could pose a threat to anyone when they get their act together.

It certainly isn’t the same easy route to the final that Barcelona have been used to in recent years and even when they get there they could be up against Real Madrid and Mourinho. If Real Madrid have just clinched La Liga would you want to bet against Mourinho pulling off yet another Champions League & Domestic League double?

From a neutral point of view an El Clasico Champions League final on May 19th would be mouth watering and with both sides kept apart in the draw it certainly looks like it could be destined for it.

So, the first of 3 big Ultimate Football Trading announcements this week and this is definitely a BIG one. BONUS: Discover the Cash Out SECRETS that Betfair do NOT want you to know! 100% FREE eBook for you! CLICK HERE! For the first time ever, since I created the UFT program I am removing a…