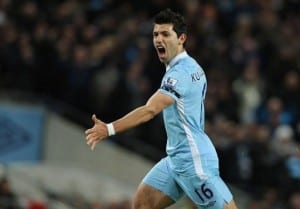 The match between Man City & Liverpool was a bit of an anti-climax in the end as the Citizens waltzed to a 3-0 win.

Man City were trading around the 2 mark for most of the day but then steamed in nicely once Suarez was confirmed as absent. I doubt we will see Man City priced above 2 for any Premier League matches this season apart from when they play Man utd so backing City @ 2 was quite a low risk position to open in this situation.

The general feeling going into the match on the forums is that we might expect a tight match which would end 1-0 either way. So, the 3-0 result might have surprised some but as usual I wasn’t surprised.

In fact, this match was almost an exact replica of what happened last time these two teams met at the Etihad in 2010. Man City ran out comfortable 3-0 winners that night too. The score line might be slightly flattering since there were long periods when Liverpool were dominating possession but there was no cutting edge which has been the story of their season so far.

So as is often mentioned on this blog, looking out for the result the last time the teams played is proving to give some good indications of how the next match will turn out. Remember, you dont have to just go for the 3-0 correct score but you could go for the other results such as the Man City win or Over 2.5 goals.

Or even a penalty being given and scored as happened in both matches.

Lots of people are expecting goals tonight when Newcastle play Manchester United. This same fixture last season actually ended up being 0-0 so you might want be careful if looking for goals tonight.

Manchester United are priced @ 1.73 at the moment which looks a bit low to me, my ratings suggest they should be 1.85 so I am hoping for a drift later in the day.

So if you are a fan of the repeat results theory tonight then you have to be laying Man Utd @ 1.73 and Everton @ 1.55. Neither side won this corresponding fixture last time out so it will be interesting to see if they can overcome it this time. I certainly wouldnt want to be backing either side at those prices. You have to also remember that Man Utd never beat Newcastle at Old Trafford in November either so they should be in for a very tough match tonight.

Just a quick shout for Bonus Bagging who came up trumps again last night by letting me know about a great offer from Bet365 which had me lock in £40 profit risk free which just adds on to the pre-match trading profits too.

Getting paid to watch football isn’t so bad after all!

Close call for the Federer backers…. BONUS: Discover the Cash Out SECRETS that Betfair do NOT want you to know! 100% FREE eBook for you! CLICK HERE! Federer started the match as 1.10 favourite. This is a curious price since, technically, the market probably has it right in that he is a 90% favourite but…

Free Football Trading Success Guide: https://sportstradinglife.com/ytfootball BONUS: Discover the Cash Out SECRETS that Betfair do NOT want you to know! 100% FREE eBook for you! CLICK HERE! If you are looking for a free and easy football betting strategy then some “geniuses” have suggested backing Man Utd/Man City/Barcelona/Real Madrid Etc at home is an easy…

Many football trading newbies often experiment with the strategy of backing the winning team in-play and then looking to trade out. BONUS: Discover the Cash Out SECRETS that Betfair do NOT want you to know! 100% FREE eBook for you! CLICK HERE! I can see why many newbies pursue this strategy since you are jumping…