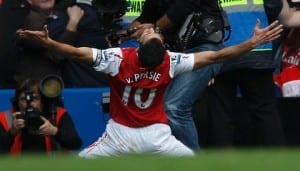 Whisper it quietly, but is it time to start backing Arsenal again?

After their terrible start to the season, there has been some decent prices available on the gunners recently even when playing at the Emirates. They fell out of favour in the markets at the start of the season due to their poor form and you might remember that Man Utd were priced as low as 1.34 to beat them in August. It was a remarkably short price when you consider the stature of the club, even though united did win the match 8-2 but you can see my point!

They were recently priced @ 1.59 Vs Stoke and also @ 1.55 Vs Sunderland at the Emirates which is pretty generous considering they would have been sub 1.30 for both matches in previous seasons. They also, strangely, ended up being priced @ 1.70 to beat Olympiakos in the last round of the Champions League which was another great price to back them at.

So, the markets have been offering generous prices on Arsenal recently and this has coincided with their form picking up too.

On the back of a spectacular victory away to Chelsea, Arsenal now find themselves priced @ 1.66 to beat Marseille (EDIT: Now Drifted and priced @ 1.82!)at home. Arsenal have only failed to win once in their past ten matches at home in the Champions League and even that was a 2-2 draw against Barcelona of all teams! Arsenal have just won their last 5 matches and have turned things around considerably from the defeat against Spurs on 2nd October.

Marseille should be able to keep this tight as they limited Man Utd (2-1) and Chelsea (2-0) to reasonable victories when they last came to England within the past year but hardly threatened the opposition if you remember those matches (The goal they scored against man utd was an own goal). You saw these two teams play each other only two weeks ago and Marseille didnt even look like seriously threatening the Arsenal goal and this was a match played in Marseille!

Its important to remember, this is Arsenal we are talking about. Inconsistency has been their middle name in the past few years and has been the main reason why they haven’t been a serious threat for the title too. So while Arsenal have come into a nice run of form recently, they have been in these situations before and managed to grab defeat from the jaws of victory many times before too. There are also still question marks about their defence and so you cant really rely on them to keep a clean sheet.

So at these prices, it might well be time to start backing Arsenal again but dont expect a smooth ride!

As we reach the end of 2012, I have had a look at the website stats for Sports Trading Life and below are the 5 most read articles from this blog in the past calender year. BONUS: Discover the Cash Out SECRETS that Betfair do NOT want you to know! 100% FREE eBook for you!…