I feel like I say this every Monday, but…. What a weekend!

I always know its been a good one when I struggle to choose which incident should make the main headline but its fair to say that the Premier League season for 2011/12 is now proving to be unmissable and in more ways then one!

Following up on my preview from Friday it seems that all my praying paid off and Man City did drop points against Fulham. I was present at the match and so trading it was quite tricky but I am pretty sure that Man City would have traded lower then 1.10 for the win when they went 2 goals up. At that moment in time I would have backed them at 1.01 as they were a class above. Then it seems that a higher power intervened and all my praying wasn’t in vain after all. City just crumbled and fell apart, perhaps it was tiredness, but I am going with the theory that god had a hand in proceedings due to my brand new  “lay and pray” strategy (patent pending)!

The match at Old Trafford didn’t disappoint either. Manchester United actually drifted past evens by kick off which made them a great value shout since they should have been around the 1.80 mark. This was one of those matches were the score line doesn’t tell the whole story. At first glance you would think that Man United winning 3-1 was a comfortable victory and they outplayed Chelsea completely however it wasn’t quite that simple. Chelsea had 18 attempts on goal to United’s 10 and so it was certainly a closer game then the goal stats suggest. 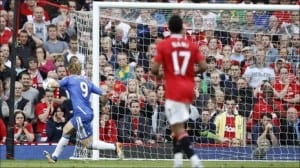 Fernando Torres’ miss pretty much summed up his whole Chelsea career. I believe that miss was the worst one in Chelsea’s 8 year history 😉 and is quite ironic in its timing since Torres was actually having one of his best games yet for the blues.  I bet those who had layed the 3-1 score line in that match were not happy with that miss, Betfair actually pressed the SUSPEND button briefly once Torres had gone around the keeper as it was surely less then a 1.01 shot that he was going to put the ball in the net. Somehow, the match finished 3-1 which didn’t seem very likely early in the second half. The Any Unquoted score line market traded as low as 1.29 which might have been worth a lay as it has been a very long time since Chelsea have conceded 4+ goals away from home in the Premier League. I had a brief look to try and find the last time it happened but couldn’t find anything so it must have been a good while back.

It was a weekend of decent prices in the Premier League with Blackburn @4.5, Norwich @ 5, QPR @ 4, Spurs @ 2.80 and Sunderland @ 2.50 all winning their matches and some of those winning them very comfortably too. This was also the first round of the Premier League since February 2007 to see all the promoted sides win on the same day. So don’t go backing something like that to happen again anytime soon!

Our biggest loser of the week award came in Spain and is Real Madrid. They were short priced @ 1.30 to beat Levante. They played poorly, had a man sent off and were trading @ 1.95 at half time but went on to lose 1-0. Considering, that Barcelona had just won 8-0 only 24 hours before then it is a big blow as you simply can’t lose ground to Barcelona at this early stage in the La Liga race. Incidentally, Barcelona are 1.55 to win the title in Spain which has come in from the 1.80 after they drew with Sociedad last week.

A big week of Carling Cup football trading action ahead of us which is always a bit of a minefield, so tread carefully folks!

Arsenal’s 0-0 draw at home to Sunderland might have been an indication of how tough the season might be without Robin Van Persie. BONUS: Discover the Cash Out SECRETS that Betfair do NOT want you to know! 100% FREE eBook for you! CLICK HERE! In that same fixture last season Arsenal took all 3 points…

We have all been there haven’t we? BONUS: Discover the Cash Out SECRETS that Betfair do NOT want you to know! 100% FREE eBook for you! CLICK HERE! You have a few bad losses in a row and you see a sizeable part of your bank has gone. You get annoyed and decide the only…

As we head into the end of 2011, its time to take a look back at some of the most popular posts on this blog in the past 12 months. This isn’t really an award ceremony but I thought it would jazz up an otherwise boring title! BONUS: Discover the Cash Out SECRETS that Betfair…

The weekend has been and gone and as usual was not without incident! BONUS: Discover the Cash Out SECRETS that Betfair do NOT want you to know! 100% FREE eBook for you! CLICK HERE! Arsenal I had a couple of low risk in-play lays that I am quite proud of. The first was when Frimpong…