Most of the articles on this website are aimed at beginners to sports trading who are not yet profitable or are yet to experience their first profitable month or year on Betfair.

NOTE: If you are reading this article as someone who is profitable then it would be great if you could offer your own tips in the comments section to help newbies get on the path of consistent profitability!

And after helping out many of novice traders through UFT and UTT I see there is a slight problem with people actually starting to become profitable and then not being able to keep it going.

So if you are someone who has had profitable periods with their trading but has not been able to sustain it or do it consistently then this article is for you!

Do NOT Up The Stakes (Yet!)

So, you just had your first profitable month on Betfair and you feel really proud of yourself.

Maybe you only made a few hundred pounds profit but it is the fact you made a profit that counts.

But then the temptation kicks in to think that you should up your stakes and perhaps next month it will be a few THOUSAND pounds of profit to look at.

And so you up the stakes only to fall flat on your face and not only do you lose money this month but you wipe out the previous gains too.

This is the most typical mistake I see many make after having a profitable month or so.

Upping stakes at this point might sound like it makes sense but it is actually the WORST thing you can do.

Upping stakes creates a new mental challenge especially if you do not up them gradually or as part of your bank.

NOTE: UFT Members there is a video on how to scale your stakes PROPERLY inside the course.

I see some immediately double their stakes heading into the next month or try to 10x it which is just a recipe for disaster.

I can understand the eagerness to grow but after conquering your first profitable month it is too early to be doing that. Mentally you have only just got your head around using the stakes you have been using. If you increase them then it affects your decision making and thus the edge you previously had can be eroded.

So whatever you do, do not up the stakes yet.

Feel free to increase them in proportion to your bank so your stakes grow as your bank grows but any sudden upping of the stakes is dangerous.

Use Your Profitable Month As A Template

And so instead of upping your stakes my suggestion is to keep everything the same and make your next aim to simply “do it again”.

Like they say about winning the Premier League. It is one challenge to win it but retaining it is the biggest challenge of all and the difference between a great team and a flash in the pan.

And so all your focus should really be on doing it again and at least matching the same profit you made the previous month.

I see some try to set new targets like doubling the profit or similar but this is all a bit immature in my view since you are just putting more mental pressure on yourself and that is the last thing any of us need when trading.

This means looking at the amount of events you traded and trading a similar amount.

Looking at the strategies you used and sticking to those.

I would even go as far as keeping your routine the same too.

If you were doing a lot of exercise and getting lots of sleep during this profitable month then that is probably a factor towards your success so keep doing that too.

Try to replicate that month as much as possible and I think you will find it likely that it starts to happen again and again.

The best thing about using that profitable month as a template is that you should find the losing runs are similar and so when you have the next losing run you can look at your records and know you went through similar the month before and it will bother you less and less.

People often go off track when they start doing the below.

Do NOT Try Anything New (Stay Focused!)

I often see many have that first profitable month or two and then feel like they have “cracked it” and so they start trying new things when it is probably too soon for that.

Almost as if they were getting ahead of themselves.

This could be trading new sports or even new money making ventures when really they should be focusing and doubling down on what is working right now.

The worst is trying to “tweak” the strategies that were previously working well for them after a few bad losses.

I promise you that if you take your eye off the ball and lose focus then your profits will vanish with it.

If you are on a good run, stick to it and focus for at least a season before exploring other things.

Many seem to be in a rush to be a jack of all trades when they should spend more time being the master of one!

So, when you have that first profitable month you might feel the instinct to up the stakes or scale things up.

But really you should work on doing the exact same thing again the next month and then doing it again and again whilst slowly scaling the stakes up.

That is the true path towards being consistent at this and it doesn’t happen overnight.

But that first profitable month can be the first step towards your goal if you follow the path correctly. 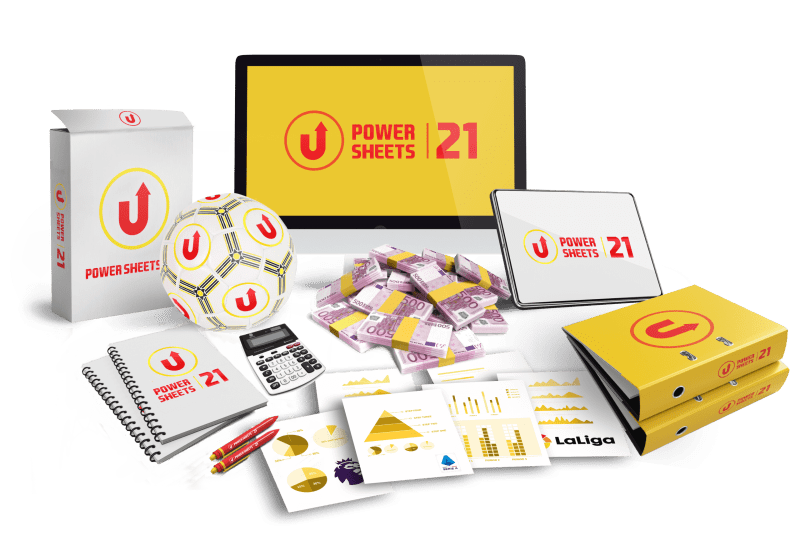 So I just wanted to knock this together so people get a full understanding of what the Power Sheets CAN do for you and also what they CAN’T do so people don’t misunderstand things or have unrealistic expectations. BONUS: Discover the Cash Out SECRETS that Betfair do NOT want you to know! 100% FREE eBook…