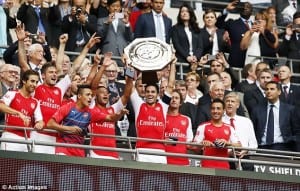 Congratulations to Arsenal after comprehensively putting Manchester City to the sword with a 3-0 win. Getting a win against your rivals at this early stage of the season is always good for the feel-good factor but does it have much relevance on the actual Premier League season? If you win this trophy does it usually spur you on to greater things?

I had a quick look at the fate of the winners of the Community, or Charity shield as it was once known to see if there were any patterns.

It certainly looks positive if you are an Arsenal fan. Based on this, a top 4 finish is almost guaranteed with Man Utd last season the only winners not to go on and finish in the top 4 and most will admit that last season was quite a “freak” one by Manchester United’s standards.

In the past 10 seasons, the team that wins the Community Shield has finished in the top 2 places in 8 of the seasons. This could mean Arsenal are set for their highest finish since 2005.

The community shield winners have gone on to win the Premier League in 5 of the last 10 seasons which might make the 7.4 available on Arsenal look enticing for some.

On the flipside, it is interesting to look at the fate of the losers of this match. Is this a sign of things to come for them?

Based on this you can pretty much write off Manchester City’s title hopes already. In the past ten seasons, only one team has lost the community shield match and then gone on to win the Premier League. That being said, it was Man City who were the team to do it!

If you fancy laying City this season then you can get lay @ 3.75.

Whether or not we can really read that much into the fate of this sort of match is another debate for another day but the fate of the losers of this match is very interesting. Only time will tell!

I believe that yesterday’s victory for Man City over Everton was a huge in the context of the title race and even the future of Manchester City. It might sound like I am over reacting but it was highlighted on this very site on Thursday that Everton have been a bogey team for Man City…

The sending off market is not the first market you will think of when it comes to trading on Betfair but it is one that I dabble in from time to time and with good success.