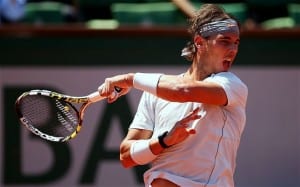 Rafael Nadal beat Novak Djokovic in the French Open semi-final which may as well have been the final considering the rankings of the two players and also the sheer interest this match generated.

Over £43.5 million was matched in this epic which is quite a substantial amount by recent standards. It just shows that Betfair trading, and in particular tennis trading, is certainly not “dying” anytime soon. Whenever these two meet in a grandslam you can be sure it is going to be good and this one did not disappoint.

With Nadal seemingly cruising to a 3-1 win, he touched as low as 1.02 but even the biggest stars can get nerves when trying to close a match out and Djokovic pounced and the match took a huge twist as the Serbian then went on to win the 4th set to take the match to a 5th and final set.

By this point there had already been over £2 million matched on Nadal at prices below 1.10 which must have surely made more then a few backers feel really uncomfortable heading into the final stages.

Djokovic actually went a break ahead in the final set and this saw huge panic in the markets as he touched as low as 1.33 whilst Nadal reached as high as 4.6 for the win.

Quite a remarkable match and just shows what can happen when you oppose a player who is trading sub 1.10, especially against a formidable opponent. The downside might only be a few ticks but as you can see below, the upside can be much, much more depending on where you like to trade out.

Tuesday was a washout in the Tennis but the timing wasn’t so bad as there was a whole evening worth of football to keep us entertained. I, like most of the nation, watched the England-Wales match and it got me thinking about a new strategy I have been toying with. As we all know, England…