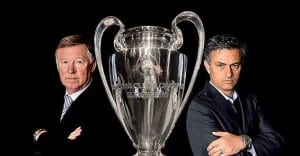 There is a huge match on tonight in case you have not noticed and there will be plenty of punters getting involved in this as you can expect.

However, I will probably NOT be one of them!

Personally, I am finding this match far too tough to call so I doubt I will be getting involved unless something stands out in-play. As most STL followers will know, I like to use trends and head to head history to at least give me an inkling of what to expect when two teams go head to head. However, in this case the last time Real Madrid played at Old Trafford was 10 years ago. So we can safely say that match does not have much relevance although I would not mind another 4-3 thriller tonight!

However, that was a blank also and I really can not remember seeing Man Utd as Underdogs at Old Trafford in recent years. They are currently 3.30 on Betfair with Real Madrid favourites @ 2.32. Although, it should be noted that a 0-0 draw will send Man Utd through also so they technically do not need to win.

The last time Man Utd have played similar opposition at Old Trafford was probably Barcelona in April 2008. My memory of the markets on this one is hazy but I am pretty sure Man Utd were slight favourites at 2.60 that night. That night Man Utd ran out 1-0 winners although that was with Ronaldo on their side rather then against them. So, if anyone can remember the last time Man Utd were underdogs at home then feel free to fill me in. Off the top of my head, I think a Man Utd-AC Milan match in 2005 had United as slight underdogs but it is tough to come up with any other situations unless you go back to the last time Real Madrid went to Old Trafford in 2003.

So, in my view, this one is just a bit to hard to call and hard to find an edge in. After seeing how the match at the Bernabeu stadium played out you have to feel that both teams will score in this one so laying the team that takes the lead could be a strategy to use on this one however, for me, it really would depend on how I am reading the match itself since the lack of historical data makes this one pretty tricky.

By the way, Bet365 are running their regular £50 in-play offer, to find out how to make the most of it then click here!