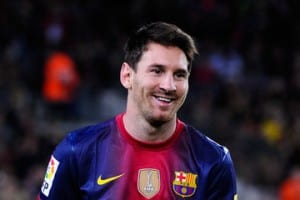 We all know that Lionel Messi is already one of the greatest footballers that ever lived and much of Barcelona’s recent success might not have been possible without him but does this mean that Barcelona are a one man team?

Well, the markets on Betfair would certainly suggest that they are!

In all my time following the football markets I do not think I have seen the markets react so much due to the presence of one single player. The way the price on Barcelona moved in their recent Champions League match Vs Benfica would imply that Barcelona only have one good player which we all know is not the whole truth. Xavi, Iniesta, David Villa are all great players in their own right.

But look at this… 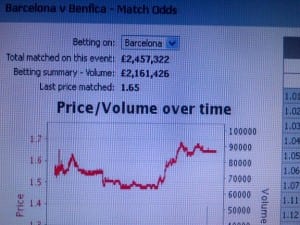 This was the pre-match drift on the Barcelona price when it was announced that Messi was not starting the match against Benfica. He WAS on the bench which makes you wonder where the price would have gone to if he wasn’t included at all!

The fact that Messi was on the bench means that he was definitely going to get a run out at some point as other wise he would have just been given the night off. The 60th minute arrived and a huge cheer erupted in the Nou Camp as everyone could see Messi was about to join the action.

Look at what happened to the price on Barcelona as a result of a “mere” substitution. They steamed from 2.50 into 2, a whole 50 ticks up for grabs! That is the type of movement you might expect if Benfica had gone down to 10 men, although perhaps the markets were implying Barcelona had just gone “up” to 12 men in this case.

I did expect Barcelona’s price to steam in once the sub was made but I expected 10 ticks maximum and unfortunately I was not on the ball enough to get in before the market moved on this occassion, but this is something to look out for in the future. 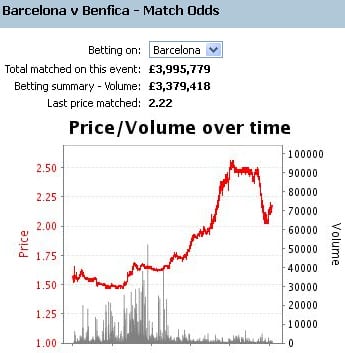 Perhaps the markets do not quite see Barcelona was a one man team but they do seem to feel he is as good as an extra man for Barcelona which was why we saw such a big movement.

If you are new to football trading I can assure you that this type of in-play movement is very rare and can only really be attributed to one thing.. The Messi Factor!

Congratulations to Arsenal after comprehensively putting Manchester City to the sword with a 3-0 win. Getting a win against your rivals at this early stage of the season is always good for the feel-good factor but does it have much relevance on the actual Premier League season? If you win this trophy does it usually…

Short priced favourites are the dilemma of almost every punter. They are often called “bankers” as we are “sure” they will win but risking so much for such little reward is not really worth it. But then again it is a guaranteed win isn’t it? 😉 BONUS: Discover the Cash Out SECRETS that Betfair do…