If you remember this recent article about improving your in-play betting there was a point made within it about “thinking like the manager” and this is something that more punters really should be doing.

This is not just my advice but also the advice of millionaire professional gambler Haralabos Voulgaris who suggests you should “think about what a coach WILL do as opposed to what he should do.” 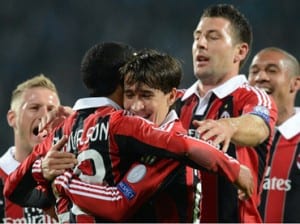 In the Champions League this week there was a match between Zenit and AC Milan.

With less then 20 minutes on the clock, Milan raced into a surprise 2-0 lead and were trading @ 1.25 with about 70 minutes left. Quite a long time to go, so the question you should be asking is what will Milan do next? Keep attacking or try and defend it?

In that first 20 minutes Milan were all over Zenit and the average punter might be inclined to believe that the rest of the match would be like that also.

However, in reality, the Milan coach is likely to tell his team to sit back a bit and conserve that 2-0 lead. His thinking would be that a 2-0 lead away from home in the Champions League is something they should try and protect and you are probably less likely to see Milan go for more goals from this point.

So if you were trading in-play then laying Milan @ 1.25 with 70 minutes left on the clock is a great time to get involved since you have to expect that Milan will invite a bit of Zenit pressure from that point.You could even watch the game for the next 5 minutes if you want to confirm this too!

In the end this was exactly what happened as Milan began to defend and eventually Zenit pulled a goal back on the stroke of half time via Hulk and Milan went out to 1.75 which would have been a 50 tick gain if you had done the lay of Milan @ 1.25.

Shortly after half time, the Zenit pressure continued and they equalised which sent Milan’s price all the way above 5.

With the score now at 2-2 and Zenit dominating the previous 40 minutes this might mislead many punters into thinking that Zenit had the “momentum” and from that point there would “only be one winner”.

However, the mindset of the Milan coach has now changed as his team no longer have a lead to defend. So he can now order them to be more attack minded once again and opposing AC Milan at this point would not be the best move since they will now open up once again. You could keep both positive results onside by laying the draw at this stage, especially if both teams are now attacking and going for the goal.

In this case it was AC Milan who popped up with the winner and that is two nights in a row that Russian teams have lost 2-3 at home in the Champions League following Celtic’s spectacular 47-1 victory over Spartak Moscow.

This is FINAL part of the 5 part blog series where I will be covering some of the BIGGEST lessons that newbies must learn from football trading if they want to succeed in the long term. BONUS: Discover the Cash Out SECRETS that Betfair do NOT want you to know! 100% FREE eBook for you!…