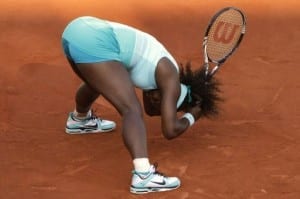 When it comes to trading tennis on Betfair I often remind people that the best way to profit from these matches is not necessarily by using a standard strategy but actually by being able to improvise and have the skill set to take advantage of some of the incredibly unique opportunities that the markets can present to you.

When you trade tennis often you will see situations where a player is seriously not with it mentally or physically and the markets are either over-reacting or, sometimes, under-reacting to this.

This is where the opportunities usually lie and we had a great example of this yesterday.

Yesterday I traded an extraordinary match between Serena Williams and Vrginie Razzano which threw up more then a few of these “opportunities” that I was just mentioning.

Going into this match Williams was a 1.02 favourite so I was not expecting much and only had it on the TV in the background.

When Serena Williams won the first set and was leading 5-1 in the tie break in the second set you thought that was it. As you can see from the attached image, Serena Williams traded right down to 1.01 for a nice turnover of £331k but then somehow she ended up losing the tiebreak and therefore losing the set.

All of a sudden, the match was tied at 1 set each and, as we know, whoever won the next set would win the match. At this point Williams had won 12 games and Razzano had won 11, yet the markets still had Serena as 1.15 favourite (!!) to go on and win the match.

Already you can see an opportunity in this instance since when players have been so closely matched during 2 sets you really shouldn’t see one of them being close to a 90% favourite to go on and win it.

Even if it that player is Serena Williams!

It got even more interesting.

The camera zoomed in on Serena Williams awaiting the 3rd set and it appeared that she was CRYING! (Seriously!)

Perhaps she was really that disappointed at losing the set or perhaps something else was going on in her mind. It is important to remember that tennis is a single player sport and if that single player is not up for it on the day then there is not much that can save them.  Even just an argument with family or a loved one can make you take to the court in the wrong mindset and it doesnt matter how good you normally are, the mental side is just as important.

Either way, crying before you are about to play the 3rd set is not very encouraging and even more reason to lay the 1.15 that was on offer as I know many did!

The markets did react to the crying and Williams drifted out to 1.19 but even that was still too low going into the final set and I could not believe what I was seeing. It felt too good to be true and in this case it was very true!

When the 3rd set began it looked like Serena Williams was not even interested in the match anymore as she went 5-0 down in the 3rd set. The 1.15 that was on offer for Serena sharply vanished once the set began and as you can imagine (and also see) the markets were complete carnage. At one point Razzano began limping and could not physically serve which made the markets believe that the Williams come back was on which just added to the mayhem that.

I expect many a tennis trader was losing his head during this one!

Williams pulled back 3 games and, after another Razzano injury scare, she then traded back as a 1.50 favourite despite Razzano being 2 points away from sealing the match. (?!) The markets were clearly not prepared for such an insane match and had no clue of where to price up each player. 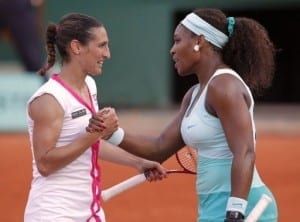 Near the end of the match even more opportunities popped up when we had a situation where the underdog was serving to win the match.

Whenever Razzano had Match Point she traded as low as 1.40, then when she missed her price went up to 1.90.

So if you were to lay Razzano every time she had match point you were risking 40 ticks to gain 50 ticks every time she missed. To put this opportunity into context, Razzano missed SEVEN match points. If you kept repeating this trade you could have made a gain of 240 ticks for an initial risk of just 40 ticks!

This was one of those “fill your boots” moments because you can literally only lose that trade once but you CAN win it multiple times. In this situation Iwas just adding even more green to my already very green screen that I had from laying Serena Williams @ 1.15.

Razzano eventually sealed the victory despite trading as high as 400 on the markets and the French Open 2012 has had its first “epic” of the tournament. Among all this the 1.01 on Williams was beaten but I cant really say there was a good opportunity to lay her when she was at 1.01. As I said, the real opportunity presented itself when she lost the 2nd set and was still priced around 1.15 especially since the momentum was with Razzano at that point.

It is also worth mentioning that Serena Williams was the favourite to win the Women’s tournament @ 3.5, so if you did lay her you wont have had to wait too long to make your money!

To sum up, there are plenty of ways to make money from Tennis Trading and you do have to be on the ball and also in the right place at the right time. There are some matches that I watch but don’t see any opportunities within and so I will not take any action and then when you least expect it you can get crazy matches like the Williams one pop up.

There is plenty more drama to come this Summer and if you are not yet trading tennis then you are seriously missing out. Make sure to check out Total Tennis Trading for plenty of strategies and trading guides to help you with the tennis markets.

The Mug is a loser. His loss stands at -£581 so far this season and the plan could be working perfectly. If he really is a Mug then he should be a loser in the long term and we could have a good free laying service here.   Below are his picks for this weekend,…

The quarter finals of the French Open yesterday proved extremely lucrative for many Tennis Traders. There were two matches in the men’s side of the tournament that you simply can not have failed to make money on. BONUS: Discover the Cash Out SECRETS that Betfair do NOT want you to know! 100% FREE eBook for…