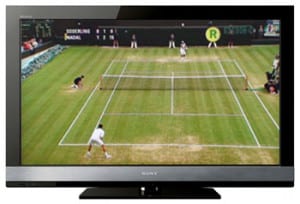 This is a guest post by Full time tennis trader Peter Scott of Dynamic Tennis Trading. You are about to read information so GOOD that you should probably be charged for it! 😉

The way to profit from Tennis Trading on Betfair has changed drastically within the past ten years. You used to be able to just back or lay a player as they scored a point as you watched the match live on the TV. However, Courtsiders ended that bit of fun and now the tennis markets are so mature that strictly mechanical strategies are hard to profit with also.

The main thing I teach all my students is the important of MATCH READING if you want to profit from the tennis markets on Betfair. This means you are watching the match live and trading based on the events you are seeing. This is not to try and beat the clock but to judge the flow of the game so you can back the player who is currently on top or lay the player who is not. Simple stuff on paper but not as easy in practice. However, Match Reading is a skill on its own and if you are good at it then consistent tennis trading profits will follow, believe me!

I thought I would share with you 5 Match Reading tips which should help you out next time you are trading a tennis match live.

“You are only as good as your last game” is a well known saying and it is something that can help massively when trying to read a tennis match live. You will be surprised at how quickly tennis matches can turn. One double fault, bad miss or unlucky point can completely flip the mindset of some of the players. A player might be cruising one moment then struggling to even score a point a few games later.
Therefore, it is important to keep in tune with the match and judge each player on how they are playing in the current game and the previous game to that (NOTE: Not a set or match but a GAME). Anything that happened previous to that game should be removed from your short term memory and think of the players in front of you as only being as good as the last game they played. Do not be swayed by big name reputations or try and second guess what you are seeing, trade only on what is presented in front of you.

For example, Player A wins his first service game 40-0 but then loses his second service game 0-40. What is more important to keep in mind? That’s right, the LAST game he played. Not the game he played before it, but the last one. That 0-40 shows you that right now that player is struggling and should be opposed in the markets until they turn it back around.

2 – Look At The Body Language

One thing Betfair robots can not see is the body language of the players (at least I hope they can not). The top level and more experienced players are often quite hard to read but the lower ranked players can be read like a book. Look out for frustrated screams, dejected looks on their face, slumping into their chair at the breaks etc.

I have seen players have a healthy lead but then they lose a few bad points and you can see from their reaction that they are growing frustrated. When someone is frustrated they can not play or do anything to the best of their ability and, for me, an opportunity to back the opposition has just presented itself. Just be sure to ride the wave and get out if that player recomposes themselves.

Not all top level players can keep their body language positive all the time. Serena Williams might be the greatest female to ever play the sport but when she begins to lose it mentally, she REALLY loses it and some of her meltdowns have made some tennis traders very wealthy people down the years. 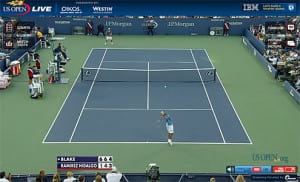 Sometimes it is easy to predict the future when tennis trading. You simply do that by looking at what has already happened earlier in the match and anticipate that the same thing might happen again.

For example, Wozniacki has just broken her opponents serve and, without trading, I watch to see what happens next. In the next game, Wozniacki has her serve broken and the match is level again.

A few games later in the match, Wozniacki breaks her opponents serve again.

Now, based on the earlier events I have a pretty good idea that Wozniacki might struggle to hold her serve once again so it is a pretty obvious time to lay her before she serves next. In lots of cases you can expect a similar scenario to occur. She might be broken again, she might even hold her serve but as a tennis trader all I want is for her to STRUGGLE to hold her serve in order for the odds to move and for me to profit. I already have good reason to believe that she will struggle to hold her serve since she was broken the last time she was in this position and so it is a “no-brain” trading opportunity. I go over lots of these examples when I describe the Breaking Back strategy in Dynamic Tennis Trading.

There are certain things you should keep an eye out for when trading a tennis match that can often give you an indication of whether or not a player is having or about to have a dip in form. Sometimes tiredness, nerves or tension can get to player and they can start performing badly for a short spell.

In all my time trading tennis, a player serving a double fault is a big sign that they have dipped and I will usually start laying that player immediately after if the odds are appropriate. Tennis players spend a huge amount of time working on their service skills and in practice they will probably hardly ever serve even a fault, let alone a double fault. However, the pressure of the match can get to them and in most cases it is a sign of tiredness so watch out for that.

Not sure who said it but tennis has been described as being 90% mental and only 10% physical. This is how much emphasis is being placed on the mental side of things. Many have said that Andy Murray would have won more Grand Slams then he has done if he had better mental strength. He lost the 2015 Australian Open after seemingly losing his concentration when he thought that Novak Djokovic was feigning injury. And if you were trading the match you could tell that Murray’s concentration had gone and there was a clear opportunity to start backing Djokovic or laying Murray there.

Things like injury time-outs can be turning points in the match and are sometimes used tactically by players to kill the other players momentum. When an injury break happens, pay good attention to who seems to have been affected by it the most. Sometimes it is the uninjured player who comes out of it the worst.

Rain breaks can also impact this too. Andy Murray was matching Roger Federer closely in the 2012 Wimbledon final. However, it started raining and the roof had to be closed. Murray looked visibly annoyed at this situation, perhaps because he knew about Federer’s strong record when playing indoors. And so, after the break Murray was not in the match at all and limped to a 3-1 defeat.

In Tennis Trading almost anything can be a turning point. I am not kidding. I have seen matches where an idiot in the crowd making noise appeared to get to one player and he had a meltdown. This is why you should concentrate and watch the match closely.

I cover match reading and a whole host of other things in my Dynamic Tennis Trading course. There are 5 strategies included BUT the main emphasis is on trading dynamically and reacting to events as you see them develop. As said, this is the future of tennis trading on Betfair and probably the only way you can profit on this sport these days!

Remember, as a special deal for Sports Trading Life readers, I am offering a HUGE 33% off this course for a limited time only.

And use Discount Code: STL33

See you on the inside! 🙂

There are many different ways to trade football and IN-PLAY FOOTBALL SCALPING is one of them. With this sort of trading the dull, boring 0-0 draw is a great match to trade rather then being the bane of your trading existence. However, many feel in-play scalping is dangerous and can get quite nervous doing it…

I do get many emails asking about the Football Trading Academy that is recommended on this website. The main question is usually asking about the “System A” strategy that Richard & Co use. I am definitely a fan of “System A” and use it regularly within my own trading portfolio. Remember, this is NOT Lay…

Those who are going through the educational process of becoming a profitable sports trader will probably have read lots of articles telling you what you SHOULD do and you can find many of those on this very website. BONUS: Discover the Cash Out SECRETS that Betfair do NOT want you to know! 100% FREE eBook…