Must say I enjoyed the first round of matches from the Champions League this week. A good round for drifts, steamers and also the short price layers too. It is always great to be able to trade a good round of football matches simultaneously and there was some good entertainment too. My only gripe with the Champions League is that there are too many matches to choose from and it seems like you are always missing out on a thriller on the other side or behind the red button!

I can safely say that those who employed the Paper Chaser strategy from the Total Football Trading package should have turned a nice profit over this round of matches. Almost, all the matches qualified and the movements went as expected if you stuck to the system. The only match that hit my stop loss was the Plzen match and so it was a profitable start to the campaign. All the rest went pretty much to plan and there were some huge moves to be caught. 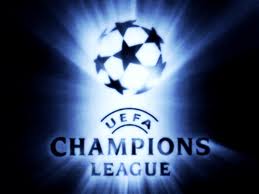 Some of the highlights included Borrusia Dortmund who were interestingly backed in from 2.20 down to a starting price of 1.86 before failing to beat Arsenal. Wednesday saw a huge move for Lille as they went from 2 down to a starting price of 1.63 (37 ticks!) and also failed to beat their opposition too. There was a lovely drift on Man Utd who started the day @ 1.84 and ended up being 2.34 by kick off, the market got this one right as they drew 1-1 with Benfica.

Other nice moves included an obvious steam on Bayern Munich from 2.20 down to 1.95 and also a drift on Zenit St Petersburg from 2.20 up to 2.56! The Champions League markets attract a lot of money which often means you will see nice market moves and the paper chaser strategy is literally perfect for it.

I noticed that on both match days there wasn’t too many goals around in the first 30 minutes. Being the Champions League, you would probably expect a cagey start from teams and it will be interesting to see if this is a trend in this tournament and I will look back over previous ones. After a slow start on both nights there were some exciting finishes and some short prices being over turned too. 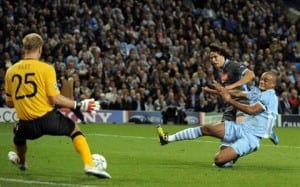 Man City @ 1.39 weren’t even the shortest price to fail to win but it was certainly one which didn’t surprise many people. The talk almost everywhere online was that Man City were too short for this match and my own ratings had them priced around the 1.75 mark! The prize for shortest price favourite to fail to win goes to Barcelona @ 1.25 Vs Ac Milan and traded as low as 1.03 in running too before drawing the match 2-2. As mentioned above, Lille @ 1.63 failed to win their match but they also traded as low as 1.02 in running after taking a 2 goal lead against CSKA Moscow. You also can’t forget Arsenal, who are always good for a short priced gubbing, they touched 1.18 in-play before conceding their equaliser against Dortmund. So it seems that there were opportunities galore for the short priced layers this week and long may it continue!

Opposing the odds on favourites with a +1 handicap in all the matches would have turned a HUGE profit in this round with only Chelsea managing to win by more then a one goal margin and even that was by a last minute goal. As regular readers to this blog will know, I love to oppose favourites in the cup competitions, especially with a handicap. The matches are often a lot tighter then the bookies prices will have you believe and in many cases (Inter Milan, Man City, Barcelona, Valencia, Lille) you don’t even need a handicap, as just laying would turn a profit too.

Tonight, we have the Europa League which is something I can’t say I am looking forward too, however I will try and make the effort. For those, using the paper chaser on the Europa League it is vital you exit way before the teams are announced as you simply don’t know what teams the managers are going to put out in this competition. I will only be focusing on the matches involving the British sides as there is way too many games happening all at once to keep up with. Good luck for those who get involved tonight, remember if you aren’t sure then miss it out!