You know it’s been a strange weekend for football when you look back and the most memorable matches were from the Italian Serie A! This is a league that has gained a reputation for dull and unattractive football however if this weekend was anything to go by then times could be changing. It’s too early to say that there could be a trend developing but last season Serie A averaged 2.51 goals per match which isn’t that far off the 2.80 goals per match in our English Premier League that we love to praise so much.

There were some great matches for the opening weekend which included Milan-Lazio, Roma-Cagliari & Juventus-Parma but the best came on Sunday evening with the live match on ESPN between Palermo and Inter Milan. I did a bit of pre-match research for this one and it looked like goals were on the menu but I was cautious in my approach since this was a Serie A match after all! Once I saw the match had started lively, I managed to lay Under 2.5 goals @ 1.50 around the 30th minute. I figured there would be at least two goals in the match which would allow me a good chance to green up later in the match.

Inter Milan took the lead not long after that so I let the trade run into the second half. I changed the channel at half time and forgot to put it back on till the 50th minute to see that the score was now 2-1 to Inter Milan after there was two goals in a minute. You have to love it when that happens!

A few minutes later and the score was 2-2. I watched the next ten minutes and then tweeted my intentions to lay the 2-2 score-line and I did so @ 2.50. The match was end to end and with about 20 minutes of play left, it seemed pretty obvious that we would get another goal. 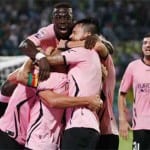 Palermo then took the lead in the 84th minute with a beautiful free kick to make it 3-2 and the 3-2 Correct score was now trading @1.48. I tweeted that we should all lay that score again as Inter would go all out to get an equaliser now. We didn’t have to wait long for the next goal as Palermo caught Inter Milan out with another stunning goal to make it 4-2!

By this point the profits for the match were already pretty high and so it wouldn’t hurt to go in again and see if you can get another goal late on. By this point the Correct Score market is closed and you have to lay the “No Next Goal” market. I managed to get my lay bet in @ 1.26 and Diego Forlan came up with a goal from nothing to make it 4-3.

With about one minute left of injury time and with Inter Milan about to take a corner I decide to go in AGAIN and got my lay bet matched @ 1.17 this time however the scoring was done and the match ended 4-3 to Palermo and a HUGE profit was made on this match as you can imagine!

You have to love a goal rush when they come late on in a match. The Correct Score odds are always really low when the final 15 minutes arrive and when you combine this with the fact that the majority of goals are scored within the last 15 minutes then you can see just how many opportunities this can create!

A really entertaining weekend and it was good to have the real football back on our screens once again. BONUS: Discover the Cash Out SECRETS that Betfair do NOT want you to know! 100% FREE eBook for you! CLICK HERE! The main headline will obviously be the slump that Chelsea are having at the moment….