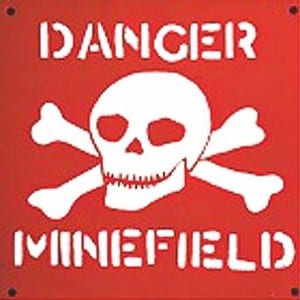 As most sensible people will agree, when there is a minefield around its best to stay as far away from it as you possibly can.

The Women’s side of the US open has been the minefield I expected with favourites including Kvitova, Sharapova and Li Na all exiting the tournament in the first week. This has led to overwhelming pre-tournament favourite Serena Williams trading from 2.80 down to 1.90 going into the second week and winning this tournament should now be a formality for Serena, but then again this is a minefield and I am staying well away from this one.

No real noteworthy shocks in the Men’s side just yet with all main favourites still on board. However, Andy Murray did his best to get knocked out last night going 2 sets down to Haase in an epic match. Andy Murray started @ 1.15 and looked incredibly off the pace in the first two sets. With Haase winning 2-0 he traded as low as 1.40 before the Murray come back began. Very soon, Murray had levelled it at 2-2 and was a break up in the final set. This saw him trade down to 1.01 for over £300k, but being Andy Murray the drama wasn’t quite done yet. He then lost a break point and the markets went into panic once again as he traded from 1.01 up to as high 1.40, a nice trade if you got it!

Eventually, Murray got a hold of the game and sealed the victory. It was an epic match and full credit to Murray for coming through it however you have to wonder how far he can really go if he is struggling against the likes of Haase. Also, being taken to 5 sets at this stage of the tournament is hardly ideal preparation for the business end next week! Andy Murray was trading @ 6.0 to win this tournament before that match, he has now drifted to 8.60 which is a bit more realistic.

Djokovic seems to be over his shoulder injury and his tournament price has now adjusted from 2.60 down to 2.10. This is mainly due to how easy he is making this game look in this tournament so far and with his closest competitor Rafael Nadal still not convincing the punters with his performances so far. Nadal is now 6.6 to win this tournament, and you should lay that price at your peril!

Talking of minefields, the internationals are happening at the moment and that is certainly no fun from a punting perspective. You will see favourites losing when you expect them to win, and favourites winning when you expect them to lose! Doesn’t matter which way you try and play it you will certainly feel like you are walking through a minefield.

It has been a season unlike any other with Manchester United performing so poorly. They are now heading towards finishing outside of the top 3 for the first time in the Premier League era and it is only now, at the tail end of the season, that the markets are beginning to realise that Man…

The Queens club is surprisingly becoming one of my favourite tournaments to trade every year. BONUS: Discover the Cash Out SECRETS that Betfair do NOT want you to know! 100% FREE eBook for you! CLICK HERE! Firstly, I like the scenery as there are not many tennis tournaments that happen in my home town of…