Chelsea’s 1-0 win at the Etihad has thrown a bit of a spanner in the works for those who thought that Man City would cruise towards the title. It was a stunning performance from Mourinho’s men as they made Man City look pretty ordinary and devoid of ideas.

Maybe the markets knew what was going to happen. City opened @ 1.80 but steadily drifted and were 1.90 by 6pm on Monday night. Then the team news broke that City would be missing Fernandinho and the drift continued. Eventually Man City started @ 2.18.

After taking the lead they were into 2.10 for the win but never looked back. In my view, they should have won by 2 or 3 goals. 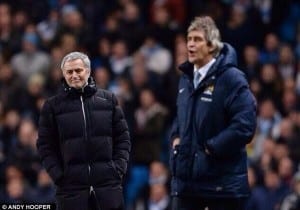 The movement in the winners market was interesting also. Man City went as low as 1.64 over the weekend but have drifted dramatically out to 2.14 by the final whistle after this defeat.

Chelsea were a huge 4.9 before kick off and are now into 3.10. They are now level on points and yet the markets still favour City more then Chelsea. I have said all along this season that the value has been with Chelsea so far as they have been matched as high as 9.60. The value might still be there when you consider their place in the table compared to Man City.

Probably the most significant thing from the match last night is that Chelsea showed the rest of the league how you beat Man City at the Etihad. You might now see some other teams giving them a good game when they go there this season which could make the run-in a bit more trickier then we all thought. Especially since City often look vulnerable away from home.

One thing is for sure, this is a great title race and this is looking likely to go down to the final day and maybe even the final minute once again.

Those who are going through the educational process of becoming a profitable sports trader will probably have read lots of articles telling you what you SHOULD do and you can find many of those on this very website. BONUS: Discover the Cash Out SECRETS that Betfair do NOT want you to know! 100% FREE eBook…

Welcome along to another edition of Big Betfair mysteries! A light hearted look at the bizarre and mysterious things which many of us sports traders notice on a regular basis! BONUS: Discover the Cash Out SECRETS that Betfair do NOT want you to know! 100% FREE eBook for you! CLICK HERE! Today we are going…