It’s often said that football is a “funny old game“, and that is certainly something worth keeping in mind when heading into a fixture program like we have this weekend. Coming off the back of an international break and leading onto the opening rounds of the champions’ league, we are probably due a few odd results which will, no doubt, have people saying what a “funny old game” this sport is.

After hammering Arsenal 8-2, wouldn’t it be just like football if man utd ended up failing to beat Bolton away? Well, I like the look of a potential upset here. Man utd failed to win here last season and just about escaped with a 2-2 draw. This new man utd team has a lot of flair but they are still lacking the steel that a tough away match at Bolton will demand and they certainly won’t be finding it as easy as the 1.45 price is implying. A straight lay of Manchester United at that price could be value as they should be 1.55 by my ratings but if you want some insurance then the Bolton + 1/1.5 handicap is also looking good and trading around 1.95 currently on Betfair. With this you only lose your stake if Man Utd win by 2 goals or more. 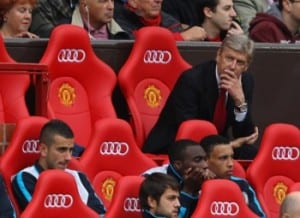 In contrast to this, wouldn’t it be a funny old game if Arsenal ended up handing out a hammering of their own? That would be typical football! They are priced @1.46 to beat Swansea at home. This is obviously reflective of recent performances, however if this match was taking place a year ago you could have expect arsenal to be trading around 1.20! A sign of how times are changing for Arsene Wenger’s men. Despite all the problems, it often takes a hammering to jolt teams into responding and there could be a backlash. I expect Arsenal will be out to prove a point in this match and will go for goals so I shall be checking out the Over 2.5 goal line when the match goes in-play.

If you are looking for an overpriced selection then Man City @ 1.19 to beat Wigan could be it, my ratings suggest they should be 1.40. With all the goals that Man City have been scoring you would fancy they might rack up double figures against a side like Wigan however in keeping with the theme of this article I would like to be one of the contrarians and suggest that Wigan will go to the Etihad Stadium to defend for their lives and might escape without getting thrashed. 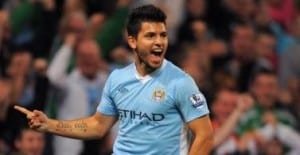 In this fixture last season, Man City only beat Wigan 1-0 and with the Champions League coming up on Wednesday I doubt that Mancini will be pushing his side for more goals late on in the match. Expect to see Aguero and Dzeko being substituted late on and the overall match tempo slowed down if the game is already won by City. The Asian handicap of Wigan +2 is trading around evens right now. This gets you your money back if Man City win by 2 goals and you lose if they win by 3 or more. I had a look through Wigan’s recent away form and contrary to wide belief, they aren’t quite the whipping boys they used to be. Last season they only lost by 2 goals at Old Trafford and by 1 goal at Stamford Bridge so with City’s minds potentially on their champions league debut it might be worth taking them on in this match. (Cue the 8-0 thrashing). So opposing Manchester City in this match is the value call, however after seeing them play recently it would take a brave man to put any money on the line against the Citizens at the moment!

There is plenty of football trading to get stuck into this weekend with all the major leagues including Italy now underway. Just be aware that coming off the International break there will be many players who are tired from all the travelling and there could be some funny results around this weekend!

The Real Madrid-Man Utd 1st leg ending in a draw was not just a good result for Man Utd but also probably for the bookmakers as Real Madrid were heavily backed by punters across Europe last night. BONUS: Discover the Cash Out SECRETS that Betfair do NOT want you to know! 100% FREE eBook for…

The age old technical analysis vs. fundamental analysis debate amongst traders rumbles on. This is a debate which splits Forex traders all amongst the world but it’s quite a new one to sports trading. BONUS: Discover the Cash Out SECRETS that Betfair do NOT want you to know! 100% FREE eBook for you! CLICK HERE!…

As we head into the end of 2011, its time to take a look back at some of the most popular posts on this blog in the past 12 months. This isn’t really an award ceremony but I thought it would jazz up an otherwise boring title! BONUS: Discover the Cash Out SECRETS that Betfair…