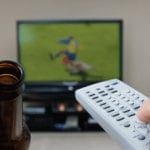 When trading sports in-play you often have the opportunity to watch the event as it happens and then base your investments on that. However, there is often quite a debate amongst some traders about whether or not you should watch the matches you trade on. Some argue that watching a match can often cloud your judgement and you might find yourself entering or exiting markets that you usually wouldn’t, and that it is best to rely on statistics when sports trading.

I believe it’s the other way around and it can be statistics clouding your judgement as you should never refuse to believe what you are actually seeing happen in front of you.

Within the TFT manuals, it is strongly suggested that you should always watch the matches that you are trading. There are those who like to trade based purely on statistics and refuse to watch the actual event, preferring to trade based on the numbers in front of them. My argument to that is…

Why not use BOTH?

For example, last season there was a match between Chelsea and Sunderland. Chelsea were strong favourites in the 1.30 range for this match and with their strong home record you might figure that backing Chelsea would be a good way to start the game. This would be with a view to greening up when Chelsea eventually took the lead.

If you decided to do that trade and not watch the match then you would have missed out on a first half were Chelsea looked inept and unusually behind the pace. If you WERE watching the match then you would have spotted a massive low risk opportunity in laying Chelsea at those low prices. In that match, Sunderland ran out 3-0 winners and I wonder how many people who blindly backed Chelsea were stung by that?

I expect after Sunderland took the lead, many traders layed Sunderland as the Statistics would have pointed towards a Chelsea equaliser. However, those who were actually watching this match would have seen that Chelsea just didn’t look capable of getting the equaliser. The value in this situation was clearly in opposing Chelsea and it was clear to see for the millions of people watching that match.

Even last Sunday, I spotted a huge opportunity in the Arsenal match which was documented in this post. If I had refused to watch this match then I wouldn’t have spotted such a great opportunity.
As traders we have the chance to manage our position and even if you get out of a trade that isn’t looking good and it turns out to be a winner then you shouldn’t beat yourself up about it as there will be plenty more to come along!

Always keep your eye on the ball!

The sending off market is not the first market you will think of when it comes to trading on Betfair but it is one that I dabble in from time to time and with good success.

I often notice that many people start out sports trading and have the aim of going full-time right from the offset! It obviously sounds great as you can lead the life you want, wake up when you want and be your own boss, however I think too many traders are putting unnecessary pressure on themselves…