Well, Friday was disappointing but also not surprising either as Andy Murray exited Wimbledon. It was groundhog year yet again for Andy as he went out in the semi-finals to Nadal after losing 3-1. This was despite winning the first set and going on to trade down to 1.70 before the collapse began.

I know many big hitters were loving the generous prices given to Nadal (1.60) and Djokovic (1.50) to beat their opponents yesterday. We now have the final that many expected would be the final from the start and it’s very enticing.

I did mention a good dutch bet in my Wimbledon analysis. This was to dutch the three of Djokovic, Nadal and Federer to win Wimbledon. This paid out at odds of 1.30 and I know a few readers had some of that and with some big cash too. Congratulations to them as its already won! I personally went for a different approach, with backing some outsiders for the trade which didn’t work out that well for me in the end. I never lost any money but didn’t win much either so perhaps next year I should just go for the obvious! 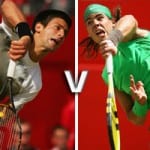 Djokovic has had a great year so far and perhaps the smart money would be on backing him to beat Nadal @ 2.44? The head to head record between the two is 16-11 in favour of Nadal and the record when playing on grass is 2-0 to Nadal too. This might not sound great in favour of Djokovic however there are signs that the tide could be turning in favour of the Serbian.

They have already played each other in four finals this year and Djokovic has won them all! The markets have priced Nadal as favourite for every one of these matches too! So, if you want to put money on Nadal to beat Djokovic in the final I think you would want more then the 1.70 currently available. Perhaps, if you were going by 2011 form only then Djokovic should be the comfortable favourite for this match.

This match should provide some great trading opportunities too as I cant see either player winning this in straight sets. So laying the first set winner with a view to trading out could be a good strategy. Particularly if Nadal wins the first set, as he will be priced around 1.20!

Good luck to those trading and betting on the Wimbledon final! Remember, you can catch my random thoughts, ramblings and trading pointers on Twitter. So become a follower and join in the banter!

Welcome to Football Trading – The Yoda Lessons! BONUS: Discover the Cash Out SECRETS that Betfair do NOT want you to know! 100% FREE eBook for you! CLICK HERE! In this 5 part blog series I will be covering some of the BIGGEST lessons that newbies must learn from football trading if they want to…