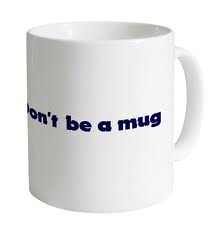 A mug punter is often defined as someone who simply bets on sport with no ambition of making a long term profit and with no consideration of doing research on the event they are betting on.

If you read this blog, then I doubt that you are a mug punter but its important that we understand the way that they think so we can avoid it!

I always feel that as an “advanced punter”, its hard to understand how the “mugs” think when putting their bets down. I had a nice weekend’s break from trading and all things Betfair related and during this I managed to get a good insight into the mind of the mug punter…

Instead of trading the Wimbledon Mens final, I attended a social gathering for a friend’s birthday where the match was going to be shown. As regular readers will know from this post, I liked the look of backing Djokovic. However, for me to enjoy this occasion completely I knew I couldn’t have any involvement. I knew if I bet on Djokovic and he lost then it would have affected my mood and so my friend’s birthday event would have been affected too. Therefore, it was best I stayed away from any involvement in the match completely.

As we all know, Djokovic won 3-1 however I was surprised at how the casual punters around me were viewing the match!

Before the match began I got into a conversation with two guys who had put some money on the game and they had both backed Nadal. I asked why and they simply replied, “well its cos hes good!” . One of them had put £150 on Nadal to win!

As the match started I noticed a few were cheering on Djokovic. I asked them if they had money on him. They replied, “No way, we just like to cheer on the underdog”

I suppose, looking at the odds then Novak was the underdog however if you compare the two players then there is no “underdog” about it. It’s quite tough to separate them, despite the recent strong head to head record in favour of the Djoker!

I don’t know if this group were gamblers or not but it just made me realise how out of touch the general public can be with the sport. To see Djokovic as the “spirited underdog” is a bit crazy. In my view, I actually saw Nadal as the underdog however no one wanted to listen to me when I put it that way!

The best mug punter of all?

Nothing could have prepared me for what happened when I sat down next to one guy with Djokovic leading 2-0. He didn’t look happy, and since I was pretty intoxicated by this time I said hello. He told me he had bet £1000 on Nadal to win this match. I said, wow, how comes you did that?

“Well I never even heard of the other guy, so I thought Nadal would win this easy”

Surely, if you have never even heard of Novak Djokovic, the World number ONE, then you shouldn’t be betting on Tennis??!

The moral of the story is…

Well there isn’t really a moral as such. However, it does show you how easily the public can be influenced once someone has a big name. Nadal is easily a much more marketable person then Novak Djokovic and so its to be expected that everyone has heard of him and thinks he is the best around. However, those who know Tennis will know that Novak has held the upper hand on him for a while now and as I pointed out on Saturday, the smart money should always be on backing the Djoker!

Similar things happen in the Premier League all season around when you get under performing “giants” such as Chelsea, Liverpool and Arsenal constantly failing however people continue to back them and drive their odds really low just because of their name!

So is there a moral or what??

Ok, I might be boring some people now. If there is anything to take from this story its that research and understanding the sport can be a big advantage, and knowing when the odds on favourite shouldn’t be odds on can be the key to making massive profits!