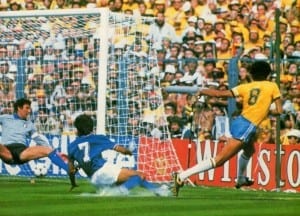 “Before Betfair” is a light hearted look at the markets would have reacted to some of the great sporting events that happened before Betfair was invented. Since Betfair was invented in 2001 this means we can only imagine how some of the historic betting events would have played out if they had been in-play but thanks to technology we can get a good idea of what might have happenened. To avoid confusion, the article is written as if the event was only yesterday….

The world was stunned yesterday by this sensational result which saw tournament favourites Brazil eliminated in amazing fashion. Was this the greatest world cup match of all time? It was certainly a good one on the Betfair markets.

Brazil were overwhelming favourites to win the World Cup this year having been backed into 2.80 favourites to lift the trophy with, what has been described as, the best team ever. 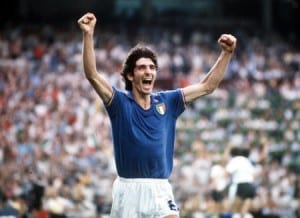 Before this match Brazil were into 1.90 to lift the trophy with Betfair opening a second “W/O Brazil market” to keep punters interested. After blowing Argentina away 3-1 in their previous match only a draw was needed by Brazil in their match against Italy to progress to the semi-final stage.

However, most did not expect Brazil to even play for a draw and they were heavily fancied to blow the little fancied Italian side away in this clash. All the pre-match money was on Brazil as they were backed in from 2.20 into 1.90 by kick off.

The smart punters though, were siding with laying Brazil in a match they did not need to win. Italy were a tasty 5.4 by kick off.

When Paulo Rossi gave Italy the lead in the 5th minute it was certainly a surprise. Italy moved from 5.4 into 2 and the layers were out in force. With 85 minutes left not many gave Italy a hope of keeping Brazil out for all that time and the layers did not have long to wait till Socrates equalised for Brazil in the 12th minute. Italy were back out to 5.40 and everyone felt Brazil were over their blip.

However, it seems there were plenty who were underestimating Italy in this match. Everyone had been overawed by the attacking talent that Brazil possessed however the Italians were organised and strong in defence. If any team was going to be able to stop Brazil it would be Italy.

When Paulo Rossi put Italy back in front on the 25th minute there were plenty of layers out again. Italy eventually traded as low as 1.40 before Falcao equalised for Brazil in the 68th minute.

After that you felt there would only be one winner even though Brazil did not actually need a winner. This was probably their undoing as they kept going forwards and were punished in the 74th minute as Paolo Rossi claimed a memorable hat trick. The draw layers were pretty pleased with this result even if it was not the team they expected to score. The draw trading down to 1.55 in this case.

Italy were into 1.30 to win the match and the layers were out again but this time it was in vain as Italy held on and the great Brazil were, astonishingly, out of the World Cup.

Knowing where the prices are expected to move to in-play is one of the first things that any in-play trader should try and learn. By having this knowledge you can then easily plan out your trades and measure your risk in advance. You are then less likely to be caught out by situations where you…

If you are interested in learning how to trade tennis on Betfair then you are probably wondering just how many tennis matches you would be expected to trade every week if you went professional. This is certainly a question I get asked often and the short answer is that it “depends” while the long answer…