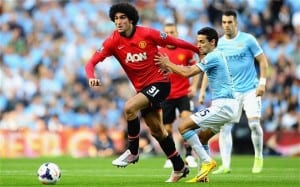 It is fair to say that Man Utd have not had the greatest start to the season with the 4-1 defeat at Manchester City rounding off a tricky start for the champions. This has left Man Utd priced @ 5.6 in the Premier League winners market which is their highest September price since the 2005-06 season.

You may remember this article where I highlighted the tricky start that Man Utd faced and suggested that they were worth opposing and City worth backing. Man Utd actually started the season @ 3.75 for the title and the drift is not surprising after 2 wins from 5.

So, despite the tricky start, is it now time to BACK Man Utd in the winners market?

Now the tricky start is over, there is a strong chance that Man Utd could finally now hit the ground running with a series of very winnable fixtures coming up, whilst their main rivals in Chelsea, Man City and Spurs will all be playing each other in the coming weeks.

The next 5 Man Utd matches are: West Brom (H), Sunderland (A), Southampton (H), Stoke (H), Fulham (A) which are all winnable fixtures and you would not be surprised if a team like Man Utd took 15 points from the next possible 15 but even a more realistic 11-12 points from these fixtures should put them right back near the top of the Premier League and should cause the 5.6 to shorten.

Chelsea, currently 4.7, face a tricky set of fixtures in their next 5 which are Spurs (A), Norwich (A), Cardiff (H), Man City (H), Newcastle (A). The fact they are playing Spurs and Man City is good news for Man Utd backers as it means one of those sides will be dropping points and the away trips to Norwich and Newcastle are the type of Banana skin matches that Chelsea have slipped up in in recent seasons. Only the Cardiff at home match looks like a nailed on 3 points for Jose Mourinho’s men but you have to expect they will take at least 9 from the next possible 15.

Man City, currently 3.0 favourites, should be able to maintain their positive start to the season but since they are already priced @ 3 there is not much room to go lower at this stage since this title race is looking like it may be the most open one in the history of the Premier League. The next 5 Man City fixtures are: Aston Villa (A), Everton (H), West Ham (A), Chelsea (A), Norwich (H). Man City will have to improve their away form if they are going to be winning the title as that was what let them down last season. With 3 away matches in the next 5 it will be interesting test of their true title credentials.

Sneaking up behind everyone is Arsenal who are currently 8.2 to win the title and enjoying a very positive start to the season. Everyone is expecting Arsenal to start collapsing however that might not be happening just yet. The next 5 Arsenal matches are Swansea (A), West Brom (A), Norwich (H), Palace (A) & Liverpool (H). All those matches are winnable “on paper” for Arsenal however they have proved to be unreliable for punters in recent seasons and they are the type of team that can produce a surprise defeat out of nothing it seems so back them at your peril.

So it does look like it is worth backing Man Utd at this point and seeing how the next 5 games go for them. The only worry is that if Man Utd stutter further during what is an “easy” period for them then that current price of 5.6 could end up hitting double figures and never coming back. However, we do have history on our side in this case and Man Utd have never finished outside the top 3 in the history of the Premier League and have rarely not ended up challenging for the title in some way. This tells us they should get back in the title hunt over the next month or so and this is looking like an ideal time to back them.

Not sure many would have expected to see Celtic beat Barcelona but they did run them close in the Nou Camp so, with hindsight a good benefit, the price of 13 available on Celtic at kick off was pretty tasty. Barcelona were actually 1.30 favourites at kick off and part of many accumulators last night…