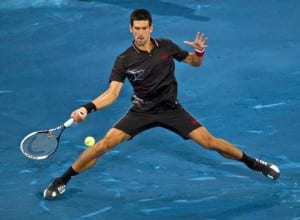 We have a very exciting guest post from Dan Weston of TennisRatings.co.uk who is the KING of tennis trading stats and he is going to talk about which ATP players are statistically most likely to choke from winning positions and which are least likely. Knowing who is likely to choke is useful since we can then lay that particular player when they go ahead confident that they will “choke” and their price will rise and we can go all green!

Anyway, I will hand you over to Dan to explain more…

Tennis traders speculate a lot on players in pressure situations – whether they choke or whether they clutch (i.e stay strong under pressure).

However, frequently this situation leads to ‘Gambler’s Fallacy’. This can be described as events that gamblers think occur more often than they actually do, because they remember significant events, such as backing a player who trades at 1.01 in-play and then loses.

Having said this, there will be some players who traders are well aware of having tendencies to struggle or thrive under pressure, and these might also be known by the markets. Klara Koukalova, for example, in the WTA has a horrific record when having what I term as a ‘dominant lead’ – either a set and break up or a break up in set three. However, the market is fully aware of this and values a break lead for the Czech veteran far less than the ‘average’ player.

With the market being much more aware of a player’s likelihood to hold than in previous times, a useful metric to use to work out whether a player is clutch or a choker is to calculate a ratio between a player’s 12 month service hold percentage and their 12 month break lead loss percentage – a stat I calculate on a monthly basis for each player.

This ratio will highlight the players who over or under perform to expectations. The word ‘expectations’ is key here with it being obvious that a player with a poor serve will have a high percentage for break lead losses, and conversely a big server will be highly likely to have a low percentage for break lead losses. This doesn’t necessarily make a poor server a choker, or a big server clutch, which is why we need to calculate a ratio based on service hold percentage expectations.

The equation to quantify this ratio is as follows:-

Using this ratio, the following players are the most clutch when a break up in the ATP (minimum 15 break leads in the last 12 months to 1st April 2015):- 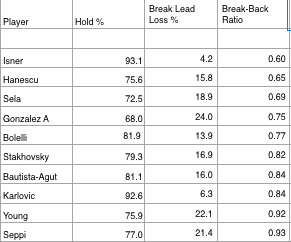 So from looking at this chart you can quickly see that, for example, John Isner holds his serve a massive 93.1% of the time and only ever loses a “break lead” or is broken back 4.2% of the time. Therefore, you might want to avoid laying Isner whenever he is serving, particularly if he is a break ahead!

Whilst there are two names that many readers will expect to be clutch a break up – big servers John Isner and Ivo Karlovic – some of the other players on the list may be a huge surprise.

Weak servers Dudi Sela and Alejandro Gonzalez feature in third and fourth place respectively, showing that when their game is on, they are capable of retaining leads. Victor Hanescu, in second position, will also be a huge surprise to many.

The following players are the least clutch when a break up in the ATP (minimum 15 break leads in the last 12 months to 1st April 2015), so these are players you would look to lay when ahead:- 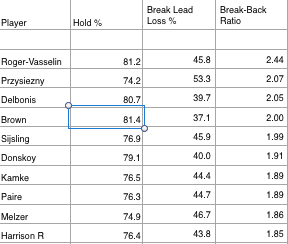 This is effectively a list of players who either choke or have severe lapses in concentration. Interestingly, no player has under a 74% hold percentage, which effectively means all players are within 5% of the ATP Tour mean for service hold percentages.

Edouard Roger-Vasselin is top of the list and he will have been one of the first guesses for many traders as the biggest choker on tour. Dustin Brown, Igor Sijsling and Tobias Kamke will undoubtedly be on many people’s lists as notorious chokers too, whilst Benoit Paire and Ryan Harrison’s inclusion is more likely to be down to concentration and motivation issues as opposed to being extremely frail mentally as a front-runner.

This article shows the type of information that can be garnered by usage of statistics, with stats effectively being a superb tool to confirm or deny subjective speculation.

I cover all this and much MORE on my Tennis Ratings website. So if you have any interest in trading tennis and knowing the best players to back, lay and trade on then check it out @ http://www.tennisratings.co.uk/

There are a few prices in this weekend’s premier league that are out of line with my own ratings. Predicting weekend price moves seems to be much trickier then during the weekend and even when homework is done the prices can still move in directions that are not expected. So do be careful if trading…