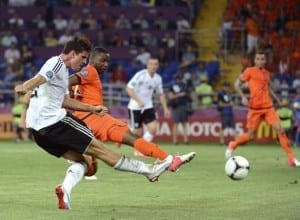 Trading the long term markets when the matches are in-play can be very fruitful.

Taking a closer look at the “Euro 2012 Top Goalscorer 2012” you will see huge over reactions when favoured players score a goal as everyone fights to back that player which forces the odds much lower then they should be and then the inevitable market correction comes just minutes later.

If we take Mario Gomez for example.. When he scored his first goal of the tournament against Portugal on Saturday his price immediately crashed in from 10 down to 5 but then the drift set in immediately and by the end of the night his price was back out to 8.

Then in last nights match as Gomez scored his 2nd goal against Germany to make it 3 for the tournament his price touched as low as 2.10, but is now currently 2.80. A price that could drift further before Germany’s next match on Monday night since there will be plenty more over reactions.

The Gomez example is not the only one. Russia’s Dzagoev touched as low as 4 in the markets when he scored his 3rd goal of the tournament for Russia against Poland. Once again the drift was immediate and he was out to 5.5 by the end of the night and is now out to 7 after the Gomez goal brace.

Poland’s Lewandowski crashed in from 20 to hit 7.2 after opening the scoring for the tournament against Greece. By the end of that match he had drifted to 15 and is now a nice price of 90.

So this is another market you should keep an eye on, not just in this tournament but all other tournaments that offer good liquidity. Laying a player immediately after they have scored can see you secure some decent trades due to the market over reaction seemingly always forcing the price much lower then it should be. Your only worry being that they might score a 2nd goal but with the markets drifting so quickly you could be out by the time that happens if you do not get too greedy and you can also cut out the market if they grab a 2nd goal.

There has been some great matches on the WTA side of the tour in the past week. Matches great for trading that is… BONUS: Discover the Cash Out SECRETS that Betfair do NOT want you to know! 100% FREE eBook for you! CLICK HERE! This time of the year is actually my favourite time when…

With the Tennis Australian Open underway this week, along with it comes the usual debate about court-siding. BONUS: Discover the Cash Out SECRETS that Betfair do NOT want you to know! 100% FREE eBook for you! CLICK HERE! If you aren’t sure what courtsiding is then check out this post from last summer about it…