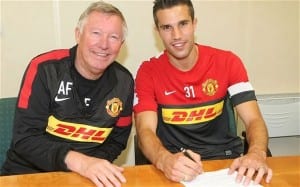 Robin Van Persie joining Manchester United has been a transfer that has rocked the world of football and also had an interesting impact on the markets too.

It is not often you see the transfer of one player have such a ripple effect on the betting markets but that is the extent of how huge this transfer really is.

Once it was confirmed that Manchester United had agreed a deal with Arsenal for RVP their price on winning the title steamed in from 3.50 to a current price of 3.15 as you can see on the below chart.

Losing Van Persie also had an obvious negative impact on Arsenal’s price as they drifted out from 14 to 17.

The steam on Man United also impacts on the price for Man City to win the title, they are now out to 2.40 having been matched as low as 2.22 for the title so far.

There was also an interesting move in the Top Goalscorer 2012/13 market as Wayne Rooney drifted from 9s to 10s since the markets obviously now expect that Rooney will not be the main man for United as he has been in recent seasons.

It is interesting to see the markets react the way they have since Robin Van Persie still is just one player and it is not like Manchester United were weak in the goal scoring department last season as they racked up their biggest goals tally since 2000.

So should United’s price really have steamed with the arrival of Robin Van Persie or is this just an over reaction due to the huge name of the man they have signed?

Time will only tell…..

The best in-play trading opportunities on Betfair usually come in the 2-way markets more then anything. These are the markets where there are only 2 possible outcomes. This is usually sports such as Tennis, Darts, Basketball, NFL and T20 Cricket that are the most liquid 2-way markets. If you are new to this then you…