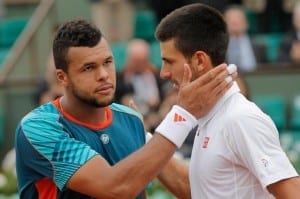 The quarter finals of the French Open yesterday proved extremely lucrative for many Tennis Traders. There were two matches in the men’s side of the tournament that you simply can not have failed to make money on.

With Djokovic starting this match as 1.20 favourite, yet the head to head record between the two men being 5-5 you would be forgiven for expecting Djokovic to trade higher in-play. However, Djokovic scored the first break and traded as low as 1.04 when winning the first set.

In my view, this was the perfect time to take him on.

For a mere risk of 4 ticks and 2 whole sets still to be won against another player in the top ten, why not?? It only takes a break point to be scored for those odds to more then double after all.

In the end Tsonga did much better then that and went and won the next two sets. Djokovic had already had over £1 million matched on him @ 1.04 by this point but now he was on the brink of exit.

A key opportunity in this match was the moments when Tsonga had match point. About 3-4 times, Tsonga had a match point  and traded as low as 1.30 but with Djokovic on serve.  This was another of those situations where you could lay Tsonga on match point @ 1.30 and if Djokovic saved it then you would gain 30-40 ticks as Tsonga would go back up to 1.70. You were effectively risking 30 ticks to win 40 and with Djokovic so strong on serve I am willing to say that the value was there in spades.

The best part is you can only lose that trade once since match point can only be scored once, however it can be saved numerous times. So once you have won the trade once you are now free-rolling and adding more and more profit to your screen.

Eventually, Djokovic broke the Frenchman and levelled the match at two sets each which clearly broke Tsonga mentally and from that point on there was only going to be one winner. For the record, Tsonga traded as low as 1.15 to win the match!

Over on the other court at the same time, it looked like Federer was in serious danger against Del Potro. Starting the match as 1.40 favourite, Federer then went 2 sets down and at his age you might wonder if he has it in him to last the full 5 sets. However, the leg injury that has troubled Del Potro all tournament kicked in and the markets eventually got that one right too as Federer took the match 3-2.

Something you will notice very often with Tennis Trading is that the markets are still very efficient before the match begins, but it is when they go in-play that all hell can break loose and prices can move all over the place.

With both matches taking place simultaneously this meant there was quite a lot of movement in the winners market. At one point it looked like we would lose Federer AND Djokovic so the markets were all over the place and this also impacted on the price of Rafael Nadal too.

In the French Open, Federer is currently priced @ 12 but has touched as low as 8 and as high as 44!

Djokovic is currently 5.2 but traded as high as 30 during yesterday’s mayhem.

The current market favourite is still Nadal @ 1.50 but he touched as low as 1.34 during the matches yesterday when it seemed like both Djokovic and Federer could be heading out.

This is another market worth keeping an eye on when the matches are in-play as the prices are impacted by the events on the court.

More of the same today please!