The opening round of matches in Euro 2012 have been a little bit more entertaining then most of us expected which gives us plenty to catch up on.

Saturday was interesting as the Netherlands were highly fancied by everyone apart from the markets themselves. I look around lots of Internet forums and social networks like Twitter before big matches in order to try and work out what sort of bets the public will be taking since, usually, this is a good indication of where the prices will be moving too.

In this case, everywhere I looked people were backing the Netherlands and many were backing them on a -1 handicap also since they were so confident.To cap it off, many thought this might be a dutch rout and I saw Over 2.5 Goals tipped up all over the place too.

Despite all this the Netherlands drifted in the markets from 1.65 up to 1.82 by kick off and the market doubt was proved right when Denmark nabbed the win.

Well, if you had done your research, or just read the Euro 2012 trend report, you would have known that backing favourites (especially odds-on favourites) in the opening round of this tournament is actually the number one bet to avoid and backing Over 2.5 Goals at close to even money in the opening round of matches is just plain silly. The only other odds-on favourite of the first round was Spain @ 1.79 who also failed to win.

It really is very interesting to read and listen to people’s opinions ahead of these matches and I always have a chuckle when people mention performance in the warm up friendly matches as a basis for the form. I even saw someone use the fact that Portugal beat Germany 3-0 in Euro 2000 to form an argument in favour of the Portugal win. I am not sure any of the players playing on Saturday were playing in that match 12 years ago so should it really be relevant? 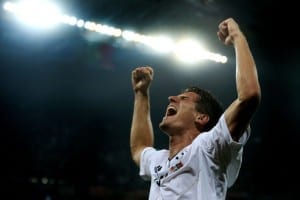 The low goal expectancy in the opening round of matches can actually create good value opportunities in BACKING goals rather then opposing them now. The “secret” of tournament matches being low scoring is clearly no longer a secret and the prices on Under 2.5 goals are getting hammered in on some matches.

The Under 2.5 Goals line in the Russia-Czech Republic match kicked off at 1.48 and finished with 5 goals. This was similar in the Croatia-Ireland match which started of with Under 2.5 Goals priced @ 1.55 and that ended with 4 goals.

With the Unders price starting so low this means you can get a good price in-play on Overs since if the match starts with a good tempo and you see chances being created then you will not see the Under 2.5 Goals price drift since the market dictates that Under 2.5 Goals will either steam or remain static in the early stages and the only time it ever drifts is when a goal is actually scored.

This is something to keep a look out for in these matches.

If you take the Russia match for example. It started off with a terrific tempo and there were one or two goal attempts in the early stages. Yet over 2.5 goals was still available @ 3.2 by the 10th minute. To put this in the context of a regular Premier League match, by the 10th minute you will normally be getting evens on Over 2.5 goals in a similar type of match.

Something to look out for during this tournament is movements in the long term markets (winners, golden boot) when the matches themselves are actually in-play.

The winners market is constantly reacting to the on-field events and if you are clever you can probably work out a plan to capitalize on this.

For example, when the Netherlands were losing, and also struggling against Denmark, this caused the price on Netherlands in the winners market to drift during the match and then drift  much more when the final whistle went. If the Netherlands are going to drift then this means another team must steam and in this case it was Portugal. They went from 22 into 15 without even kicking a ball yet!

If you are good at planning ahead then you can actually look to back (or lay) certain teams when other key matches are happening in anticipation of a surprise. For example, if you would have backed Portugal before the Dutch match then it is not likely they would have drifted anywhere when the Netherlands were playing since the match did not involve them. So, if Netherlands went and won you could have exited your trade for a tiny loss, however if the surprise result does happen you would have secured a huge trade from 22 into 15. Incidentally, Portugal have now drifted out to 30 after losing to Germany so clearly you would want to close your position before the team in question actually plays. 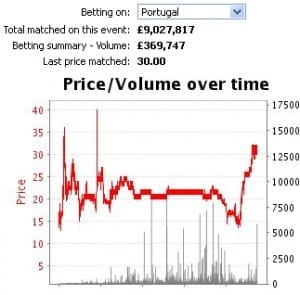 During the Spain-Italy match you could have actually just layed Spain in the Winners market @ 3.85 before the match and backed them as high as 5 in-play after they fell behind to Italy. In this case, Spain were already very low @ 3.85 so its not likely they will steam much further based on the opening match (unless they blew Italy away) and you are actually in a very low risk-high reward position. 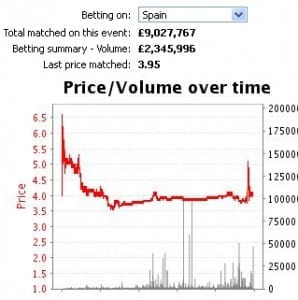 There are opportunities all over the place with this market and you really just need to keep a good eye on it so you understand the market dynamics before getting any serious money involved in it.

If you were backing a team and hoping to lay them at lower odds then its worth actually putting your lay bet in the market as an order as you might just get matched in-play when the prices are over reacting all over the place to the on-field events.

Anyway, England are involved today and we can expect there to be a huge amount of fall out tomorrow morning. I will also take a closer look at some of the pre-match market moves and offer some reasoning on some of the strange moves we have seen so far.

With many people getting stuck into Tennis Trading during the French Open I expect a few of the newbies will have noticed the fast moving markets. In most cases the markets will be reacting BEFORE you see the point scored on TV. BONUS: Discover the Cash Out SECRETS that Betfair do NOT want you to…