A question I often see being asked and also get asked myself is… “Does Laying the draw in football trading still work?”. When people first set out trading football it is normally the first strategy they learn, however it doesn’t end up being as easy as it sounds.

Well, It depends on what you mean by “work”?

As a strategy, or plan of action, it does work. You lay the draw and then back the draw at higher odds after a goal goes in.

So, YES, it still works and works just as well as it has for years.

So why do people say it doesn’t work?

Well, recently we established on this very blog that a strategy is nothing more then a “plan of action” however in that same article I also pointed out that some people don’t see a strategy as just being a plan but as some sort of “guaranteed way of profiting”. These are the same people that will probably tell you that the Lay The Draw strategy “doesn’t work” and also that all strategies don’t work and you cant make money from this game etc.

It really depends on your expectations when using the method. If you are expecting that laying the draw will allow you to profit on every football match you trade and is some sort of “loophole” then you will be seriously disappointed. If you see it as a way to profit on certain matches which you carefully select then it can be a great way of making profits.

I know traders who make their living from “Laying The Draw”. The fact is, they work hard at it. They will research every match they enter and ensure that the statistics are on their side with the trade. If you select your matches correctly and stick to your plan then you should do well with this type of method in the long term.

Where do people go wrong with LTD? 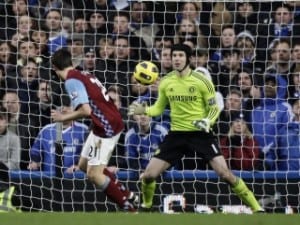 There are many ways to go wrong with using the LTD method. This includes poor match selection, poor liquidity, not having a clear plan when the underdog scores, staying in till the end because there “must be a goal”.

Do remember, that this is TRADING and the same trading principles apply. In my view, the reason most people go wrong with LTD is because they don’t “let the winners run, and cut the losers short”.

For example, most will lay the draw from the start and then lock in a profit immediately once the favourite scores. This normally provides a profit of 30-40% on your stake.

However, when you hit a 0-0 you can often be risking more then 100% of your stake since you are laying which gives a higher liability.

So, if you immediately lock in a profit after the first goal then you are risking 150% to potentially win 40% which means you are effectively backing at odds of 1.30 which isn’t a favourable risk-reward ratio at all.

Then again, if the favourite is leading 2-0 why lock in a profit at all? Why not let it run till the end of the match and win 100%?

The main problem for newbies is that they “fear” losing and they fear that equaliser coming which will ruin their trade. When you are new to this game, you see a green screen and you want to take the profit as soon as possible. You fear the fact that you had the chance to take profit and might still end up with a loser when really you should be racing your profits as far as possible.

It can be annoying if the favourite leads 1-0 and the underdog brings it back to 1-1 and you end up with a losing trade but this is trading and its not meant to be easy!

Lay The Draw USED to work better though, didnt it? 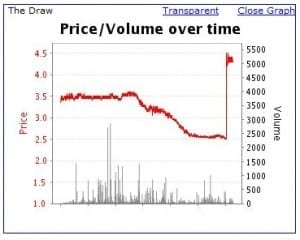 Some will suggest that Lay The Draw actually used to work a lot better then it does now.

Apparently, you were able to lock in profits in excess of 60% after the first goal was scored by the favourite and in recent years the markets have adjusted since “everyone” is using this method.

I cant confirm or deny that, however I have been on Betfair a very long time and the draw price has been behaving relatively the same for a very long time too. I remember using the LTD during 2004 and this was when I first realised that the odds don’t jump as high after the first goal as some would have you believe.

So, perhaps the Draw odds used to jump higher after the first goal when Betfair was brand new and the markets hadn’t yet matured but the markets have been how they have been for a very long time now and we have proven that they are pretty efficient when it comes to prices these days.

The only way to beat the market is to pick your opportunities.

The “Lay The Draw” strategy is a bit like Marmite amongst Football traders. You either love it or hate it but it does still work!

If you are interested in learning more about profiting from this type of trading, then you could check out my “How To Master Lay The Draw” playlist on youtube, check that out here!

Alternatively, feel free to check out my full FREE guide to laying the draw on Betfair.

There have been strange things going on with Betfair in the past year.  You may remember a recent post on here asking if Betfair were phasing out the exchange in favour of their newly launched Sportsbook product. BONUS: Discover the Cash Out SECRETS that Betfair do NOT want you to know! 100% FREE eBook for…

The World Matchplay of Darts 2011 has been great entertainment as usual and these tournaments normally are when they are broadcast on Sky Sports. BONUS: Discover the Cash Out SECRETS that Betfair do NOT want you to know! 100% FREE eBook for you! CLICK HERE! After watching darts over the years, I can firmly say…

One of my favourite long term markets on Betfair is the PREMIER LEAGUE WINNERS MARKET. It is a surprisingly over reactive market when you consider how long term it actually is but this just means there are more opportunities for sports traders like us. BONUS: Discover the Cash Out SECRETS that Betfair do NOT want…