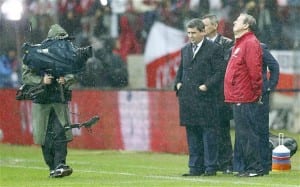 We often talk about team news and injuries affecting the pre-match prices but not much is ever mentioned about the impact that the WEATHER can have on the market prices. In Cricket the weather can be a huge factor and it can also affect football also.

I put “Starting” in quotes since it was clear to almost everyone that this match was not going to go ahead in these circumstances. Even if it somehow was played @ 9pm like some suggested you could have just exited the trade for a minimal loss before the match kicked off.

ITV were suggesting the match was going to be played 24 hours later if the weather was better and this is where the opportunity presented itself.

If the match was going to be played the next day then there is a good chance the rain will have stopped and the conditions will be better. This will inevitably force the bookmakers to change their odds on Under 2.5 goals which should result in a market drift.

This was quite a low risk opportunity as you can see from the chart below that 1.60 was a support point for this market due to the flatline at this number and it did not look like the price was going to go lower then that.

So you could speculate by laying Under 2.5 Goals @ 1.60 and seeing what happens. If you did then you would have profited from the inevitable drift once the match was announced as being postponed till 4pm the next day when clearly the roof would be on and the conditions would be better.

The price drifted out to 1.72 the next morning.