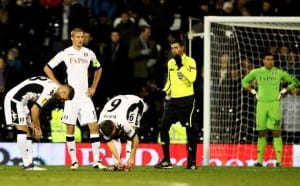 Trading a football match involving a team you are supporting is always a bit of a dangerous mix. The Europa League reached the climax of the group stage last night and the biggest gubbing of the night just happened to involve Fulham.

Being a Fulham fan, you don’t get much to look forward to every season bar the odd brush with relegation so reaching the knock out stages of the Europa League with the chance of playing a team from Manchester or a team from Madrid was very appealing but it was snatched away in the cruelest manner.

Fulham had to win to qualify and were priced @1.25 to do that. I even tweeted during the day  “Fulham should never be 1.25 against anyone. Back us at your peril folks!” and they drifted to 1.30 by kick off. (Not because of my tweet I hope!)

Anyhow, I sat down to watch the match on Channel 5 even though I was meant to have been at the stadium and with Fulham 2-0 up at half time and trading @ 1.02 you felt all was OK.

The second half was the same old problem that there has always been with Fulham and that’s scoring goals. Sometimes I do wonder how we avoid relegation every season when we cant seem to win away or even score that many goals. It really is a mystery!

It was a dull second half and I was feeling pretty smug about my decision not to brave the cold weather to watch it. Something I am even happier about now I know how it ended!

As a fan, sometimes you feel the need to take out a bit of “insurance” when your team is cruising just in the off chance that something crazy might happen. So, I put in a lay of Fulham @ 1.01 for £100 and £1 liability (In hindsight I wish I layed more) and just let it run. Odense pulled a goal back to make it 2-1 but you still felt Fulham were comfortable. This was a team that featured a player by the name of Eric Djemba-djemba after all!

Then with 6 seconds left on the clock we somehow pulled an England (must be the white shirts) and snatched defeat from the jaws of victory when the Odense player headed to level the scores at 2-2. I had just won a 1.01 lay but I certainly wasn’t jumping around about it!

In the end, £77k was matched @ 1.01 on Fulham in that match and the Correct Score of 2-1 traded as low as 1.02 before the headed goal which knocked us out of the Europa League. A bitter pill to swallow but that is football!

Oh well, Manchester united are the visitors to the Cottage next Wednesday and you can bet your life I will be braving the cold for that one 😉

Onwards and upwards as they say!

By the way, Fulham are priced @ 12 to be relegated. With Man Utd, Chelsea and Arsenal to play within the next two weeks that could well be a price that trades lower or maybe I have no faith 😉

Trading the Betting Exchanges is still a relatively new form of market trading and the lack of mainstream media coverage about it has led to many myths being developed. Here are 7 COMMON BETFAIR TRADING MYTHS along with the reasons behind them and whether they are true or false! BONUS: Discover the Cash Out SECRETS…

Can it work? Can you really make money simply laying the 0-0 on Betfair’s Correct Score market? BONUS: Discover the Cash Out SECRETS that Betfair do NOT want you to know! 100% FREE eBook for you! CLICK HERE! We look into the ins and outs of a very popular newbie approach which is laying the…