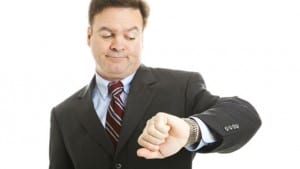 One of the most frequently asked questions I get is, “How long will it take to start making money from Betfair trading?”.

It is the type of question where the answer “How long is a piece of string?” would be appropriate, however there are a few things I can say for certain with regards to it.

One thing that is for certain is that you will find it very hard to become profitable straight away and within a matter of weeks or months. I had an email recently from someone who had been trading for a few weeks and was wondering why he had not yet ‘cracked it’.

It is an easy trap to fall into as I remember when I first got involved in the world of Betfair. I expected that I would be pulling in 4 figures profits within just a month of practicing. However, the harsh reality kicked in for me and it was actually a few years of doing it in my spare time before things began to ‘click’.

The reality is that for most people you will probably looking at years rather then weeks or months before you begin turning consistent profits.

This is not usually down to the actual methods or strategy but probably actually down to a development of your mindset and the psychology behind trading over this time.

Going back to when I first got involved with all this, I was in a ‘rush’ to start earning the big money and this meant I did not take enough time to really learn the markets and develop strategies. I often get the feeling from people who email me that are just starting out that they are in the same sort of rush I was.

Ironically, it was only when I put the world of Betfair trading on the backburner and did it in my spare time that I began to see good results. I guess less pressure allowed me to discover new and interesting angles.

The Sultan over at Centre Court Trading summed this up recently in a brilliant article. He wrote

“Expect to be learning for years

That’s right – YEARS! I have received emails from people who have started tennis trading for just a matter of weeks, who seem to think they must be doing something wrong because they are not making money. Either they have bought the wrong guide or  are applying the wrong strategies or there is something they must be missing. They want an answer, something that will give them a quick fix to easy profitability. I usually tell them that there is nothing they are doing wrong other than being impatient. I tell them that in all likelihood, they will still be learning in a few years time and if they are making money in 6 months time, they are either very lucky or one of the gifted few.

I would hazard a guess that if every trader was told “learning to trade the sports markets takes on average 3 years to become proficient” (I actually think it is longer than this but we’ll go with 3), at least half of those traders would not bother even trying to give it a go. I’m not sure I would have, to be honest! Most certainly expect profit within a few weeks. Even the most realistic and level-headed of us would probably be thinking within 6 months. Well I did this FULL TIME for 2 years before I got anywhere and I’m neither a gambling addict, nor short of academic qualifications. I’m just an average guy who didn’t give up when the going got tough – though I probably should have! The simple fact is, it takes time to learn anything, especially something that has the potential to be so financially rewarding. If it was that easy, exchanges wouldn’t exist – we can’t all be winners.”

Very true words, and pretty much every profitable trader I know took a few years before getting where they wanted to be.

As The Sultan says “Expect to be learning for years”. If you can expect this then you wont make any hasty or rushed decisions in the meantime. Betfair is not going anywhere anytime soon so why not just trade in your spare time and gradually build up your experience?

There is no need to be in a mad rush to quit your job and go full time with trading on Betfair. If you really hate your job so much or need a career change then you are better off going into something you already know. Learning how to be profitable on Betfair is a new skill and one that takes a serious apprenticeship (and a lot of blown banks) to achieve.

It is often said that the only way to find value in the Match Odds market of a football match is by backing The Draw. The theory being that hardly any “casual” punters like to back the draw and so bookmakers can afford to offer value on The Draw knowing it is not likely to be backed much.