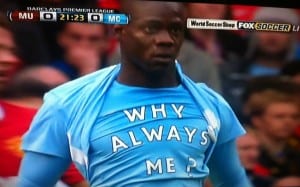 As we all know, it was quite a spectacular turn of events at Old Trafford on Sunday with Man City running out 6-1 winners. I don’t remember witnessing a defeat like that for the Red Devils at Old Trafford and it was one of those “Once in a lifetime” type matches that people will always look back on in years to come. I remember seeing United hammered by 5 goals at Newcastle in 96 and at Chelsea in 99 but nothing like it at Old Trafford.

The Red Card for Johnny Evans did, in hindsight, completely change the game and this is something I have observed a lot down the years. Red cards can lead to games turning absolutely crazy during the final stages of a match, especially if that team has been down to ten men for a considerable amount of time. Players legs can get tired and this can lead to a goal glut in the closing stages as we saw at Old Trafford on Sunday since the players left on the pitch have no energy left to defend against a team of 11 men that are hungry for more goals.

With about 15 minutes left, the score at 3-0 and the odds on Under 3.5 reaching 2, I stuck in a lay @ 2. The game was still far too open so another goal looked likely and Darren Fletcher obliged with a great goal to make it 3-1. I then moved on to the Over 4.5 market and did the same as Man utd were pressing to get another one back but this time Man City scored (dont ask who, I lost track) and made it 4-1. After that, with the odds on Under 5.5 trading around the 1.40 mark, It made sense to play up the profits and go for another one. As we know, Man City made it 5-1 and I did the same again on the Under 6.5 market which was now trading around 1.25 going into injury time and I couldn’t believe it when they got yet another goal. It felt like I had found an ATM machine on Betfair.

I documented a similar match where this happened earlier in the season involving Inter Milan and Palermo and the best thing about this laying strategy is you only need to get one goal and after that you are just doubling and doubling your profits. Its worth looking out for late goals in matches when a team is depleted and the attacking team is hungry to fill their boots.

The Manchester Derby proved very profitable in the end and that was on top of a free £50 bet that the excellent BonusBagging service informed me about. I could have guaranteed about £30 profit but I punted it on Over 2.5 goals when the match went in-play and took the full profit. It was risk free either way and in hindsight Over 2.5 was neve 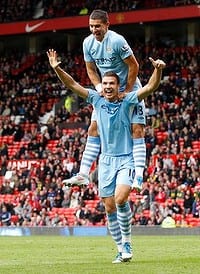 r in doubt in this match.

The manner of the defeat for Man Utd has distracted away from a disastrous day out for Chelsea down at Loftus Road as they lost 1-0 to QPR and had two men sent off in the process. No late goal glut in this one despite the nine men as QPR looked absolutely hopeless in front of goal and failed to really kill off Chelsea. With QPR trading @ 1.25 with only the one goal lead I decided to lay them even though Chelsea had 9 men and it almost paid off as they went very close to grabbing an equaliser. It wasn’t to be and it was a poor weekend for short priced favourites in the Premier League with Chelsea @ 1.35 and Liverpool @ 1.30 both failing to win.

The impact of those matches has now seen Man City become the new favourites in the Premier League winners market. They are now trading @ 2.20 to win the trophy in May and Manchester United have drifted out to 3.25. It is only October and Man City have no title race experience so 2.20 looks a bit short at the moment.

With Barcelona failing to beat Sevilla on Saturday, there is now a new team at the top of the Spanish Premier League and its not Real Madrid. Little Levante are now at the top after quietly grinding out win after win this season. Last night, I tweeted out a tip on Twitter as Levante were priced @ 4.5 to beat Villareal. The price seemed strange as Levante have been in superb form and Villareal have been the opposite. It proved to be a great bet as Levante ran out 3-0 winners, I wish the markets made such glaring errors more often!

Carling Cup is back this week so I will be having a “Tennis week” and focusing on the tournaments in St.Petersburg and Istanbul. There will be some news about the release of Total Tennis Trading either today or tomorrow too so make sure you keep checking back for more info!