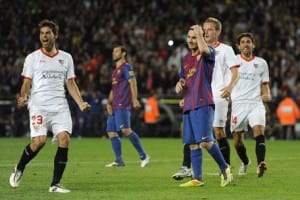 Matches between Barcelona and Sevilla are normally always entertaining affairs. These used to be quite closely fought matches however with Barcelona’s recent elevation to footballing gods you now have to expect a routine 4 or 5-0 win when they meet at the Nou Camp.

So, last night it felt like a victory for football when Sevilla managed to pull off a shock 0-0 “win” at the home of the Spanish giants. I did lose a bit of money by laying the 0-0 with about ten minutes left but when Lionel Messi misses a penalty you have to realise that its just not meant to be.

I only entered the market when the odds on 0-0 hit about 2.20 so the damage wasn’t anything to write home about, however I know for a fact that loads of people out there would have been laying 0-0 from the start. The starting odds on 0-0 last night were 38! Ouch if you were a layer!

The markets were so disbelieving that the match could finish 0-0, that the odds never actually reached 1.01 despite 7 minutes of injury time. For the record, The last traded price on the 0-0 was 1.05. Most matches will normally touch 1.01 as those who have fast pictures will hoover up the money once the whistle is blown but I guess no backers were taking that chance last night!

With Barcelona pre-match favourites @ 1.15, I am probably right in presuming that a lot of people lost a lot of money on this match whilst the more shrewd people amongst us will have been laughing all the way to the bank after laying Barcelona at that ridiculous price.

I wish I could say I was amongst the shrewd crowd, however I have given up laying Barcelona these days despite them being so over priced for every single match.

So Saturday’s match was a victory for those who seek out value bets as the best value bet is ALWAYS to oppose Barcelona these days, the annoying thing is that its hardly ever the winning one!