There are literally hundreds of different types of trading opportunities to be had in a typical tennis match. One of the most lucrative can often be when a favourite chokes when serving for the match or even at Match point. Remember, in sports trading, to make a profit we don’t need that player to choke completely but we do need them to at least seem like they are going to choke which can create low risk opportunities for us.

I particularly love to lay the player who is serving for the match, especially in Women’s matches. It’s very rare that they will serve to love in these scenarios and you can easily scalp a few ticks or go for a really big swing should that player “choke” and lose their serve. Normally, when a player is serving for the match the markets have pretty much assumed that its match over however in Tennis its never normally that simple. 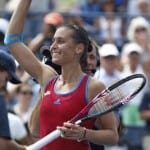 There was quite a big example of this in the match between Flavia Pennetta and Peng Shui. Pennetta was the better player over the two sets and soon traded @ 1.08 when she was serving for the match. This is really low when you consider that she was only one break ahead of Peng at this stage.

Before serving the next ball, Pennetta went to the side of the court and looked as if she was going to vomit and then appeared to be slightly choking on her vomit. This caused sheer panic on the Betfair markets as it was clear that something was definitely up with Pennetta. She then lost the next 4 points to lose her serve and send the set into a tie break.

Pennetta went from trading as low as 1.03 up to 1.60 going into the tie break. A nice amount of ticks for a small outlay!!

The drama wasn’t over yet though. With Flavia Pennetta resembling a dead woman walking the tie break seemed to be a mere formality for Peng. The commentators were expecting a retirement any moment soon and it seemed that the Betfair markets agreed. Peng soon traded as low as 1.30 to win the whole match and she hadn’t even won a set yet! All this had developed within the space of less then 10 minutes!!

It was 5-1 in the tie break and most had decided that Peng would take the set however Pennetta rose from the dead and scored the next SIX points to take the whole match!

A great finish to the match and it just shows that it can often pay well to lay the player who is serving for the match as you never ever know when they might choke, and when its Women’s tennis they very often do!

Wow! BONUS: Discover the Cash Out SECRETS that Betfair do NOT want you to know! 100% FREE eBook for you! CLICK HERE! Football really is a funny old game and not many people had the foresight to predict that Man Utd would actually end up crashing out of the Champions League the way they did….