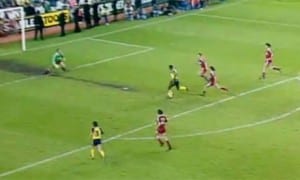 Since Betfair was invented in 2001 this means we can only imagine how some of the historic betting events would have played out if they had been in-play. This is a light hearted look at how we feel the markets would have reacted to some of the great sporting events that happened before Betfair was invented. The prices are based on similar matches that have happened since and the article is written as if the event was only yesterday….

Today we look back at what has been deemed the most spectacular way that the English title has ever been won, although Man City fans might have a good argument against that. We are going all the way back to the final day of the season in 1989 and the match between Liverpool and Arsenal from Anfield. 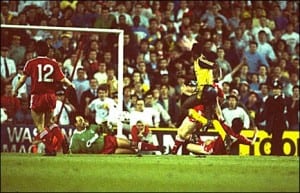 Yesterday saw one of the greatest shocks a football fan could ever witness as Arsenal became champions at the expense of the mighty Liverpool and in “Fortress Anfield” too.

With Liverpool chasing a historic double, there wasn’t many people that were giving Arsenal much of a chance of snatching the title. Arsenal were 15 points clear in January but spectacularly fell apart and it now seemed a mere formality that Liverpool would clinch a record breaking 19th title.

Going into this match Liverpool were now 3 points clear of Arsenal. The only way Arsenal could win the title was by beating Liverpool at Anfield by TWO clear goals. Considering, Liverpool had not lost at Anfield by two goals for over 3 years and Arsenal had not won at Anfield in 15 years it seemed like a bit of a long shot.

In fact, the markets had Liverpool @ 1.05 to be Champions with Arsenal trading @ 20 before kick off!

The Match Odds market favoured Liverpool who have an immense record at Anfield. Liverpool were 1.90 by kick off, with the draw @ 3.75 and Arsenal outsiders to win the match @ 4.9. When you consider that Liverpool would have been happy with a draw in this match you would have been a bit silly to want to back them at odds-on in this situation.

Many felt Arsenal might be able to win at Anfield but to win by two goals was probably a bit of a stretch however George Graham refused to concede the title in the run up to the match, stating that they were there to bring the title back to London. However, even the most optimistic Arsenal supporters were preparing for the worst.

The first half was extremely tight as you probably expected. There were few chances and there was a nervous tension in the air at Anfield. However, by half time the score was 0-0 and it was so far so good for Kenny Dalglish’s men. Arsenal were playing very defensive and by this point Liverpool were trading @ 1.03 to win the title.

The tide began to change when Alan Smith gave Arsenal the lead in the 52nd minute and, all of a sudden, Arsenal were one goal away from winning the title. Those who had backed Liverpool as low as 1.02 by this point were faced with a very nervous wait.

The price on Liverpool drifted to 1.15 for the title which still seemed pretty low considering there was now just one goal in it but the markets were so in love with the team that has dominated football for the past 20 years that not many believed Arsenal had it in them to get the 2nd goal.

As time ticked on, Arsenal were struggling to create chances and it seemed like Liverpool would hang on to claim the title. 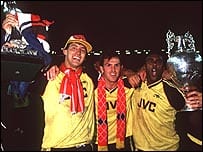 In the 2nd minute of injury time, Arsenal’s Michael Thomas burst through the midfield, managing to dodge a tackle from Liverpool’s Steve Nicol before slotting the ball past Bruce Grobbellar to stun the Anfield fateful and hand the title to the gunners.

This was virtually the last kick of the game and by this point Liverpool had already hit the 1.01 mark and Arsenal had traded as high as 400 in the markets.

25 seconds after the ball hit the back of the net, it was Arsenal who were now 1.01 to win the title as the final whistle went and they had won it with a goal difference advantage of just 8 goals!

A truly stunning way to win the title and you have to feel you will never see a league title won in more dramatic fashion then that ever again! 😉

Well, if every England friendly is going to be entertaining as that then they should have them more often! BONUS: Discover the Cash Out SECRETS that Betfair do NOT want you to know! 100% FREE eBook for you! CLICK HERE! Like most of the nation, I sat down to watch England play Holland on ITV1…